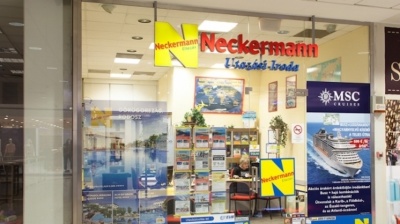 Former Thomas Cook subsidiary Neckermann is one of the largest travel agencies in Hungary.
By bne IntelliNews November 29, 2019

A Hungarian investor has taken over Neckermann Magyarorszag, the Hungarian unit of bankrupt UK travel company Thomas Cook, local media reported on November 28. No details were revealed on the transaction price.

The seller is Thomas Cook Austria AG, the former owner of Neckermann, whose British parent company filed for bankruptcy on September 23. The company is being deleted from the company registration book, according to Hungarian media sources.

After the collapse of the world's oldest travel group, its subsidiaries in Poland or Germany also announced insolvency. The Hungarian unit continued its normal, day-to-day activities without interruptions. No clients were left stranded abroad.

As one of the largest travel agencies in Hungary, Neckermann sold more than HUF21bn (€62.5) worth of products and services last year and generated HUF651mn in profit. The company's book value is estimated at HUF10bn.

The company has made a name for itself for its solid business model and some of its marketing tools were adopted by the parent company. Neckermann has 19 offices in the country.

Thomas Cook Austria sold Neckermann to SalesInFlames Consulting, a comany founded in 2011. Until now, it has been a dormant company owned by Gergely Szugyi, the CFO of Central Media Group, Hungary's leading online and print publishing company with 50 printed publications, including gastronomy, entertainment and women magazines  and 19 online sites, including Hungary's leading news portal 24.hu. It remains outside the scope of government-controlled media.

Zoltán Varga, the owner of the Central Media Group, is the 24th richest Hungarian businessman on the Forbes 2019 list, with an estimated HUF45bn in assets.

Varga has invested previously in Hungarian-owned discount airline Wizz Air and in Slovakia and the Czech Republic. It has stepped in to finance Slovakian technology company AeroMobil, which is planning serial production of flying cars.

Budapest-listed IT company 4iG said on June 15 that it signed a non-binding letter of intent to acquire a 51% stake in Space-Communication (SpaceCom), an Israeli ... more