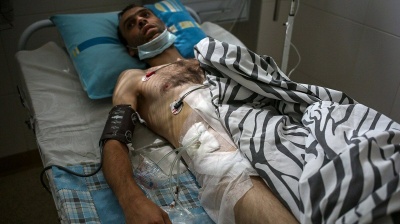 Following a three-day-long crackdown, horrific pictures emerged of the injuries suffered by peaceful protesters from police beatings in detention centres
By Ben Aris in Berlin September 16, 2020

Human rights watchdog Human Rights Watch has released a report detailing the brutal police beatings and torture by Belarusian security forces during the crackdown on demonstrations that followed the blatantly falsified presidential election results on August 9.

Police arbitrarily detained thousands of people and systematically subjected hundreds to torture and other ill-treatment in the days following the elections. Victims described horrific conditions in the detention centres, with people made to lie on top of each other with dozens crammed into cells designed to hold only a few people. There were widespread reports of beatings, prolonged stress positions, electric shocks, and in at least one case, rape, according to the testimony of the victims gathered and documented by HRW.

Many of the victims suffered serious injuries, including broken bones, cracked teeth, skin wounds, electrical burns and mild traumatic brain injuries. The crackdown lasted three days after the vote until the authorities released they had gone too far and apologised and began to release the reported 6,600 that had been detained. There have been confirmed reports of six deaths and some 50 people remain missing, according to other local NGO groups.

HRW detailed some of the more severe injuries that included more serious and permanent complaints such as kidney damage. In Hrodna, a 29-year-old journalist said that when he was arrested, despite displaying his press credentials, an OMON officer broke both his wrists. A medic described witnessing an incident in Minsk on August 11, in which an OMON officer trying to arrest a motorist who had stopped his car shot a rubber bullet point-blank at him. The medic said she treated the victim on the side of the road, but he ended up needing surgery to extract the bullet from his lungs. Six of the people interviewed by HRW were hospitalised, for between one and five days.

“The sweeping brutality of the crackdown shows the lengths to which the Belarusian authorities will go to silence people, but tens of thousands of peaceful protesters continue to demand fair elections and justice for abuses,” said Hugh Williamson, Europe and Central Asia director at Human Rights Watch in a statement announcing the results of its research. “The United Nations and the Organization for Security and Co-operation in Europe (OSCE) should urgently set in motion inquiries to ensure that evidence is collected that could contribute to accountability for grave human rights violations.”

The UN Human Rights Council is due to hold an urgent debate on Belarus during the session that will run from September 14 to October 6, and HRW also called on the OSCE to promptly open inquiries.

HRW interviewed a total of 27 former detainees, 21 men and 6 women, nearly all of whom said they were arrested between August 8 and 12. Some were arrested as they took part in demonstrations that they described as peaceful; others were grabbed off the streets or from their cars. Many shared medical documents and photographs of injuries. At least five still had bruises and/or wore casts at the time of their interview.

Local NGOs have also been gathering evidence and have interviewed hundreds of victims, collecting evidence that they hope can eventually be used to prosecute Belarus' President Alexander Lukashenko and the officers responsible if the protests are successful in ousting him and installing a new democratic government.

HRW also spoke with 14 people with knowledge of the arrests and abuse, most between August 20 and 29, in Minsk, Hrodna and Homiel, including witnesses to arrests, healthcare workers and detainees’ relatives. HRW also examined 67 video recordings and written accounts by former detainees and their relatives, either from public sources or shared directly with researchers.

“On the basis of Human Rights Watch’s findings, much of the physical abuse by riot police and other law enforcement agents constitutes torture, as do the detention conditions that interviewees described,” HRW concluded.