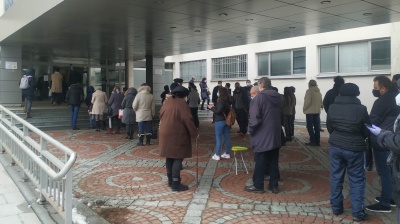 Hundreds of people lined up in huge queues in front of hospitals across Bulgaria after a sudden decision by Prime Minister Boyko Borissov to unlock mass vaccination on February 19.

Until this weekend, relatively few Bulgarians had been vaccinated compared to other EU countries, partly because, as polls show, many people are unwilling to receive the shot.

Borissov’s announcement came a few hours after the biggest emergency hospital in the country, Pirogov, said it would vaccinate anyone in any of the first four phases of the immunisation plan — including key workers, the elderly and people with chronic illnesses — in the three days starting on Friday, February 19.

“All Bulgarians who wish to get the vaccine should be allowed to do that as quickly as possible,” Borissov wrote on Facebook.

In a video broadcast by local media, he expressed anger at all the people from the first phases who said they wanted to get the vaccine but failed to go to hospitals for the injection when their time came.

There was some confusion over Borissov’s order to Health Minister Kostadin Angelov, as it wasn’t clear whether the plan to secure green corridors for everyone was only for the weekend, so many people decided not to wait and to seize the opportunity.

Although the lines seemed overwhelmingly long, in front of the military hospital in Sofia on February 21 the queue was moving quickly. 100 people were vaccinated in less than an hour, with the medical staff well organised and working smoothly.

“I feel honoured,” said one young woman, ironically, to her partner after receiving the injection personally from the head of the crisis team dealing with the pandemic, Professor Ventsislav Mutafchiyski, who was vaccinating people along with the rest of the hospital’s medical staff.

Among those queuing outside were many of the thousands of Bulgarians who cannot wait for their lives to return to normal and are eager to get any vaccine now instead of waiting for weeks or possibly months.

“We travelled more than 100 kilometres to come for the shot. I know it is not the best possible option, but it is better than nothing,” Peter, 75, told bne IntelliNews outside the hospital.

He and his wife live in a small town and, although they are included in the list of people who wish to get vaccine at their local GP’s office, no one knows when or what type of vaccines their doctor will receive.

Other people in the queue were parents of young children who were helping each other out with babysitting so all the adults could get vaccinated over the weekend.

“I am not doing it just for myself. I want the vaccine as I have children and must take care of them. And I want it because of everyone who cannot get the vaccine because of their health condition,” Daniela, 45, said.

While some people were happy to have the chance to get vaccinated sooner than expected, many others were angry about the lack of organisation at the start of the mass immunisation programme, accusing Borissov and the authorities of creating additional chaos and increasing the risk of the disease spreading.

Moreover, even hospitals like Pirogov, which attempted to make a schedule, were unable to follow it due to the large number of people gathering in lines after the announcement that everyone is welcome.

Another hospital in Sofia announced on February 21 it will start 24-hour immunisation and is accepting anyone at any time.

As a consequence, the share of people who have been vaccinated started rising sharply. 4,000 people were vaccinated on February 20 alone. As of February 21, Bulgaria had vaccinated more than 108,000 people. Angelov said the authorities are considering creating green corridors for everyone who wishes to get the shot during working days too.

“There are thousands who wish to be vaccinated. We are considering securing green corridors at certain hours during the work week as well,” Angelov said.

Polls carried out in February showed that the share of people who are willing to get the vaccine, no matter from which producer, is only between 10% and 25%.

During the week, managers of a big retail chain (who wished to stay anonymous) called on their employees to invite their friends and relatives to go for the shot after hundreds of their employees turned it down.

Most of those who do not want to participate in the immunisation programme fear its potential health consequences or believe conspiracy theories that the shot includes a chip that would establish control over their life and take away their freedom. Others fear they might develop diseases such as autism, or say they do not want to be guinea pigs for something developed so quickly.

“I would rather go and live in abandoned village than allow them to give me that shot,” Emil, a 35-year-old father from Sofia, told bne IntelliNews.