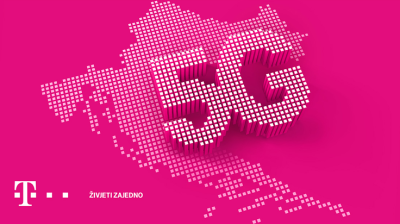 Hrvatski Telekom announced on October 29 that it has launched Croatia’s first 5G network.

The company said in a press release that the network will “enable the connection and automation of a large number of sensors, industrial devices, autonomous vehicles, drones and the further development of telemedicine.”

The network is based on Dynamic Spectrum Sharing (DSS) technology and is already operating in Zagreb, Rijeka, Split, Osijek, Samobor and Sveta Nedelja.

"With the 5G network, we create opportunities for numerous innovations that will enable economic and social development. Today we are laying the foundations of the future and I am proud that Hrvatski Telekom is pushing the boundaries again and setting new standards,” said Kostas Nebis, president of the company’s management board.

Chief technical officer of Hrvatski Telekom Boris Drilo said the launch of the network was “the culmination of many years of work and significant investments with which we have not given up even in such an economically challenging period, because social and economic progress is possible only through technological development”.

“The application of 5G technology will enable the further development of existing, but also completely new, digital services, such as sensor networking and artificial intelligence in the context of ‘smart and green solutions' in manufacturing, agriculture, health and the public sector,” Drilo added.