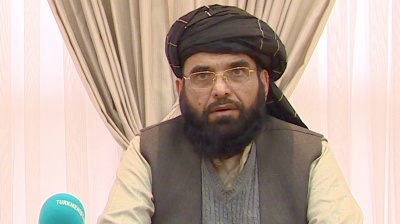 Suhail Shaheen, who was serving as a member of the Taliban’s Qatar-based negotiation team, speaking to reporters in Ashgabat in February.
By Kanat Shaku in Almaty October 7, 2021

The Taliban takeover in Afghanistan means that the fate of the Turkmen-led Turkmenistan-Afghanistan-Pakistan-India (TAPI) gas pipeline has once again been plunged into the realm of speculation.

When an agreement for the TAPI project was originally signed in 2015, work on Afghanistan’s segment of the pipeline was scheduled to start in 2017. By 2019, however, the Ministry of Mines and Petroleum was announcing that construction work on the Afghan stretch would get going in earnest in 2020. Afghanistan, under the government that fled the advancing Taliban amid the US pullout, was looking to earn over $400mn in transit duties annually from a functioning TAPI pipeline.

The pipeline has been designed to provide up to 33bn cubic metres per year of gas from fields in eastern Turkmenistan. Gas flows would go to Afghanistan, Pakistan and India. The Turkmen pipeline section is expected to cost $1bn, while the whole project is projected to cost $10bn. Some estimates show the costs ballooning up to $22.5bn. Though Turkmenistan formally broke ground on the pipeline in December 2015, the actual state of the Turkmen stretch of the pipeline still remains shrouded in mystery.

Much of the project’s future was put in question during the Afghan war due to the associated instability. The emergence of a potentially stable government, even led by the Taliban, may be seen as a game changer.

Why the project may work

To everyone’s surprise, in 2018, the Taliban expressed their support for the project, promising to help make it a reality in Afghanistan in exchange for jobs. The enthusiasm appears to remain alive following the Taliban’s re-emergence, after 20 years, as the ruling force in Afghanistan.

Taliban spokesperson Muhammad Suhail Shaheen, in an interview with Sky News, stressed that the TAPI pipeline and a proposed rail connection between Turkmenistan and Afghanistan were “long-term priority projects”.

The Taliban have also made encouraging noises as regards the proposed Turkmenistan-Afghanistan-Pakistan (TAP) high-voltage power transmission lines and railways that would run from Turkmenistan to Afghanistan if all went to plan.
That demonstrates the generally favourable attitude of the Taliban towards Turkmenistan. The Turkmen government held talks with the Taliban even prior to their takeover of the war-torn nation in anticipation of the US troop withdrawal.

Moreover, both Turkmenistan and Pakistan have shown support for Afghanistan’s new Taliban-led government, placing the project’s prospects in a favourable light from a geopolitical perspective.

Turkmenistan, though, has committed to covering 85% of the project’s costs, which is something of a problem as things stand right now as the remote nation appears to be going through chronic economic and budgetary issues, demonstrated by countless reports of Turkmen citizens plunging ever deeper into poverty.

Why the project may fail

Simon Pirani, senior research fellow at the Oxford Institute for Energy Studies (OIES), told New Europe in September that TAPI was already economically unfeasible even prior to the Taliban’s rapid takeover of Afghanistan.

“Basically it’s very hard to see how the economics of TAPI can work under any circumstances,” Pirani said. “Unless you think the high gas prices will go on for 15 or 20 years, then this project does not work because then it is cheaper to bring LNG [liquefied natural gas] to India or to Pakistan and the difficulties of building the pipeline and the expense of building the pipeline mean that this project cannot work.”

An article published by the Atlantic Council in September suggested that the pipeline’s security is not the pivotal issue for TAPI’s success or otherwise. Rather, the article posited that the pipeline financing has always been the main obstacle. When the project’s price tag is combined with the various upstream costs of delivering 33bn cubic metres of gas per annum, TAPI’s costs would balloon to $40bn, the piece said.

Considering that Turkmenistan has pledged to fund most of the project on its own, the pipeline would only be viable with significant funds from international lenders—Turkmenistan, it seems, has not been able to secure any meaningful financing for the project from banks and private energy firms. Now, the necessity of dealing with the Taliban may further reduce any chances of Turkmenistan finding external funding.

Construction of the Afghan section officially began in February 2018, but more than three years later no significant progress has been reported. Further developments on the project are likely to remain on shaky ground for years to come.

INTERVIEW: Kazakh gold miner AltynGold on a roll
7 hours ago
Russian retail investors return to bank deposits as interest rates rise
13 hours ago
Ready for war at any time in southern Armenia
2 days ago
Montenegro’s dysfunctional ruling coalition limps on
2 days ago
Gazprom says it will use windfall gas crisis cash to up boost capex
3 days ago