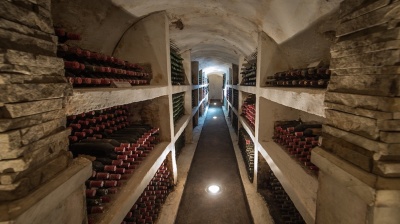 The Moldovan village of Purcari has been at the centre of the country’s wine industry for centuries. Today, Purcari Wineries is the country’s biggest wine exporter, and is expanding into markets in Central Europe and beyond.

The Bucharest Stock Exchange (BVB)-listed company’s chief operating officer (COO) Eugen Comendant talks to bne IntelliNews about Purcari’s international expansion — and the impact of the coronavirus epidemic, climate change and the East-West standoff in the region.

Since its Bucharest debut in February 2018, when it became the first ever Moldovan company to hold an IPO, Purcari has been on an intensive modernisation and expansion drive.

The investments at Purcari, which include a new bottling line that will significantly increase capacity, are due to be completed this year. Purcari has expanded its warehouse capacity, and made further investments to improve the way wine is dispatched. The company is considering further upgrades at its other wineries, but a final decision has yet been made.

In terms of its sales geography, post-IPO the company has continued with its expansion plans in the Central and Eastern Europe (CEE) region. Its primary market — and second home market — is Romania, which accounts for around 40% of its sales, compared with around 20% in Moldova. These are followed by Poland (10%), China (7%), the Czech Republic and Slovakia (5% each) and Ukraine (3%).

“Purcari has maintained the growth that it promised investors. Our strategy states that we want to be champions in Central and Eastern Europe, and that’s where we focus most of our efforts, but at the same time we are addressing other markets in Western Europe and beyond,” says Comendant.

Further afield, not just Purcari but probably any big winery sees China as an important market, Comendant tells bne IntelliNews. “Yes, it comes with various challenges, the most recent of which is the coronavirus, but there are others such as China’s very large geography, with many regions that have to be tacked separately, differences in consumer behaviour and the way wines are sold. We need to adjust to the particularities of this market but we are already seeing success and will continue to focus on China.”

Like most Moldovan wineries, Purcari has reoriented towards Western markets since a series of Russian embargoes cut winemakers off from what was previously Moldova’s largest export destination. This was helped by Moldova’s signing of an Association Agreement and Deep and Comprehensive Free Trade Area (DCFTA) agreement with the EU in 2014.

Moldova is one of the states on the front line of the new standoff between East and West. The small country is literally divided, with its eastern flank controlled by the internationally unrecognised government in Tiraspol, backed by Moscow, while Chisinau is torn between movement towards EU integration and its history in the Russian sphere of influence.

Comendant says that while Purcari still “keeps Russia as an option, never dismiss[ing] it completely”, the company “would be careful in how we develop that market again because [we] want to be sure no risk comes with the growth of sales.”

Another geopolitical development in the region with implications for Moldovan winemakers was Russia’s annexation of the Crimea in 2014. At a stroke this saw the loss to Ukraine of half of its approximately 60,000 hectares of vineyards. Bad news for Ukraine, which saw half of its wine grape supply disappear overnight, but better news for wine producers in neighbouring countries such as Moldova. Purcari sees the potential to grow its business in Ukraine as “very high”.

“We continued to deliver on our ambitious growth plans and look forward to sustaining that momentum in 2020 too … We have a number of exciting innovations in the pipeline and count [on seeing] the payback from them in the upcoming years,” said Victor Bostan, CEO, when the results were published.

Indeed, the company’s story has been a compelling one for investors. The 2018 IPO was more than four times oversubscribed, despite coinciding with a period of turbulence on global markets.

Its former majority shareholder, private equity investor Horizon Capital, recently reinvested. The fund originally invested in Purcari back in 2010, as a 64% shareholder via its Emerging Europe Growth Fund II (EEGF II), but it completely divested its outstanding shares by October 2019, after reducing its participation in the February 2018 IPO, earning circa 3.3 times the investment made.

However, demonstrating its belief in Purcari’s growth story, Horizon recently returned as an investor in the company, spending $7mn on a 6.8% stake in January from its new fund, EEGF III.

“Horizon believed greatly in the company and wanted to return. They managed to acquire a new 6.7% stake in Purcari so they are now back as part of the shareholder community,” says Comendant.

“[W]e believe that Purcari has significant further upside potential, hence when the opportunity arose, we moved swiftly to seize it and are privileged to return as shareholders in the company from our latest fund, EEGF III,” said Lenna Koszarny, founding partner and CEO of Horizon Capital.

As it expands in Central Europe, Purcari is benefitting from changing tastes that have seen a shift away from beer and spirits and towards wine.

“Research we see shows that beer is on the decline in Central and Eastern Europe and wine is picking up, especially the mid to high segments in the wine industry. We do not play in the low-price segments in any of the markets because we believe this is not where the long-term return on investment should be looked for, but in the medium to the upper price segments, which are growing as a share of the total wine category,” according to Comendant. “Overall, things are looking good for the wine industry.”

Unsurprisingly, there are different tastes when it comes to wine among the countries Purcari exports to, with, broadly speaking, a preference for easy to drink dry wines in Western Europe, while wine drinkers in Central and Eastern Europe prefer semi-sweet wines and appreciate an oaky flavour.

“Dry wines do not yet have a big share of the market in Central and Eastern Europe. However, the overall trend in pretty much all the markets where we are present is that dry wines are picking up. This is a good sign for us and for the industry, because dry wines are usually in the premium, higher price segments that provide better margins to the wine producers,” he says.

The history of winemaking in Moldova dates back millennia, and winemaking is part not just of the economy but of household traditions; most Moldovan men pride themselves on their ability to make wine, and the small country is estimated to have the largest density of vineyards of any county worldwide.

Comendant talks of the terroir that makes it possible to produce “fantastic wines” — the soils, amount of sun, the angles of the slopes. In terms of latitude, the Bostovan winery is about level with the wineries of Burgundy. Back in 1878, Purcari wine won its first international gold medal when it was selected at a blind testing in France; the judges though the wine was a Bordeaux.

Today Purcari Wineries comprises three wineries — its flagship Purcari, Bostavan in the south of Moldova and Crama Ceptura in Romania, as well as brandy producer Bardar. The group has around 1,200 hectares of vineyards in Moldova.

Climate change is clearly the big long-term issue facing any industry — like winemaking — that depends to a large degree on weather and climate. Current projections are that with no action global temperatures could rise by as much as 4.8C above pre-industrial levels by the end of the century; the optimistic forecast if current pledges are honoured is around 2.8C.

There are already worries about how this will affect Europe’s wine belt, which is expected to shift northwards, with some of the southerly areas no longer fit for grape-growing, while new areas will open up to the north.

Purcari has already observed changes in recent years. There have been no spring frosts — one of the four main risks for wine grapes alongside hail, drought and pathogens —in the last few years.

“We have to acknowledge that climate change is real,” says Comendant. However, he adds, “Moldova, being slightly on the north side of the wine producing belt will be even in a better position to produce good grapes for good wine as this belt moves upwards towards the [north] pole.”