Headline inflation hits 13.9% y/y and is still far from peak in Moldova 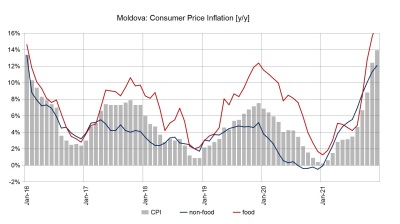 Consumer prices increased by another 1.7% in December and the annual headline inflation climbed to 13.9% y/y from 12.4% y/y in November, the statistics bureau BNS announced.

Full-year average CPI inflation was 5.1%, significantly above the 4.5% forecast inked by the central bank in November when it also said that the consumer prices would rise by 14% in 2022.

The National Bank of Moldova (BNM) decided to increase the refinancing rate by 1.0 pp to 6.50% at its December 3 meeting, in the fourth rate hike last year to address rising inflation and inflationary expectations. Further rate hikes are expected soon.

The inflation outlook looks particularly gloomy in Moldova, where the electricity prices (-7.9% y/y in December) have not yet followed the upward pattern of the energy prices. The main electricity supplier in the country, Premier Energy, is reportedly considering applying for an 85% hike and Moldovagaz may ask for another price hike as the import price rose by 50% compared to November when the end-user prices were set by the market regulator.

At $650 per 1,000 cubic metres, the import price of the natural gas will probably not rise further, but moderate toward the summer — but the effect of the higher gas price has still not passed through to overall consumer prices and the process will continue until the end of the year. The country is very vulnerable to the volatile price of natural gas on the European markets, as it has no storage capacities.