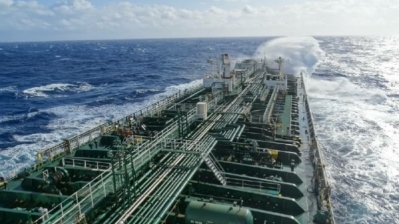 The five tankers are thought to be shipping 1.5mn barrels of gasoline and consignments of key chemicals.
By bne IntelIiNews May 28, 2020

Ultra-hardline Iranian daily Kayhan has described the arrival in Venezuela of tankers from Iran sent to relieve the South American country’s crippling fuel shortage as "humiliation for America in the Caribbean".

Venezuela, like Iran, is under crushing US sanctions and the opportunity taken by the two countries to help each other out—the Iranians, who, like the Venezuelans, are facing severe economic problems caused by US sanctions, will earn welcome revenue from the tanker deliveries—is seen by both countries as a slap in the face for Washington. After the tankers departed for Venezuela, the Trump administration said it was considering options for a “response” but so far there has been no White House move prompted by the shipments.

After the first two of five dispatched fuel-laden tankers reached Venezuela—Refinitive Eikon data on May 28 indicated the third had reached its destination and the fourth had entered the waters of the gasoline-starved nation—Kayhan quoted Tehran-based analyst and academic Foad Izadi as saying that Iran’s assistance for the fellow sanctions-hit country marked a defeat for the US and as saying: “For several weeks now, the Americans have been threatening Iran in various ways.... But with the successful arrival of Iranian tankers, the famous saying by [Iranian revolutionary leader Ayatollah Ruhollah] Khomeini that ‘America can’t do a damn thing’ took on real meaning.”

Other nations ‘will take note’

Izadi contended that other nations would take note of the "success" of Tehran’s policy vis-à-vis the US, leading to the crumbling of US sanctions.

Meanwhile, reformist Iranian daily Etemad was quoted by Reuters as stating: “Sanctioned countries have started to fight back against bullying on the international scene."

“Tehran is signalling that despite Washington’s [sanctions-led] campaign of 'maximum pressure,' it will not only continue to help its allies but it also has the ability to do so," Sanam Vakil, deputy director of the Middle East and North Africa program at Chatham House in London, told RFE/RL.

“Moreover, brazenly sailing into waters so close to the US is intentionally provocative," Vakil added.

Speaking on May 27, the US assistant secretary of state for Near Eastern affairs, David Schenker, said Washington was “not pleased” with the shipments and was looking at its options.

“These are two pariah states that have horrific human rights abuses,” Schenker said during an online event organised by the Beirut Institute, as reported by Reuters. “One could imagine them sending other things—I mean weapons, who knows?”

The US special representative for Venezuela, Elliott Abrams, has said Iran is being paid in bars of gold for assistance in providing the Venezuelan oil industry with components.

Additionally, some reports have suggested Iran will be paid around nine tonnes of gold, worth $500mn, for the approximately 1.5mn barrels of gasoline and key chemicals brought by the five tankers.

A consortium formed by the Romanian state-controlled companies Hidroelectrica, Electrica and SAPE holding will reportedly submit a firm offer for the assets that the Czech utility group CEZ is ... more