‘Half of Nagorno-Karabakh civilians abandon homes amid fighting’ 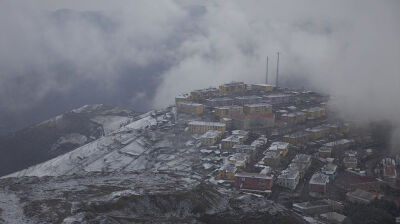 Dashkasan, located north of Nagorno-Karabakh, is one of the towns in Azerbaijan that Baku accuses Armenia of indiscriminately shelling.
By bne IntelIiNews October 7, 2020

Half of Nagorno-Karabakh's civilian population have already been driven out of their homes by the fighting between Armenian and Azerbaijani military forces over the breakaway region, an official of the enclave said on October 7.

As the conflict continued for the 11th day, with no sign of a ceasefire, the Nagorno-Karabakh administration's rights ombudsman Artak Beglaryan told AFP: "According to our preliminary estimates, some 50% of Karabakh's population and 90% of women and children—or some 70,000-75,000 people—have been displaced."

The death toll for civilians and soldiers on both sides is thought to run into the hundreds but amid the battle and information war it is too early to give a precise estimate.

Both sides continue to claim that the other is indiscriminately shelling civilian areas. Earlier this week, Amnesty International issued a report corroborating information that cluster munitions were used during a bombardment of Stepanakert, Nagorno-Karabakh's main city, known to the Azerbaijani Armed Forces as Khankendi. Nagorno-Karabakh is a self-proclaimed ethnic-Armenian-controlled republic, but is still internationally recognised as part of Azerbaijan. Amnesty called on both Armenia and Azerbaijan to become parties to the Convention on Cluster Munitions, which neither of the two have signed.

On October 6, the European Court of Human Rights (ECHR) responded to a request from Armenia for an interim measure against aggressive backer of Azerbaijan, Turkey, concerning the conflict in Nagorno-Karabakh. “Taking account of the escalation of the conflict, the Court now calls on all States directly or indirectly involved in the conflict, including Turkey, to refrain from actions that contribute to breaches of the Convention rights of civilians, and to respect their obligations under the Convention,” the court said.

Turkey angrily rejected the ECHR statement. It claims to have no boots on the ground in the conflict and has denied mounting evidence that it has sent Syrian jihadists to fight on Azerbaijan’s side.

Putin concurred on October 7, saying in an interview on Russian state television that Russia will continue to fulfil its CSTO obligations toward Armenia. He added that he is in constant contact with Pashinian about the conflict and said that Armenia has not indicated it is unhappy with the Kremlin’s actions on the matter. A ceasefire must be agreed upon “as quickly as possible”, even if a resolution to the decades-old conflict over the enclave takes longer, Putin also stated.

"Of course, this is a huge tragedy. People are dying. There are heavy losses on both sides," Putin added in the interview.

Separately, Putin spoke with Azerbaijani President Ilham Aliyev about the conflict over the phone, the Kremlin said on October 7. Putin's spokesman Dmitry Peskov said the two leaders agreed to continue their dialogue on the conflict, without giving details. It was the first time Putin and Aliyev had spoken since fighting erupted.

William Hill, a global fellow of the Kennan Institute, told RFE/RL: “As a CSTO member, Armenia in theory has the right to call on Russia for support should the current conflict threaten its security—which could force Moscow to choose between its role  as ally or mediator,” Hill concluded, noting Russia has also kept close relations with Azerbaijan.

French Foreign Minister Jean-Yves Le Drian said Russian, French, and US representatives would meet in Moscow on October 12 to find a way to get the warring sides to negotiate a ceasefire. "We want everyone to understand that it's in their interest to immediately stop hostilities without conditions and that we start a negotiation," he told the French parliament's foreign affairs committee on October 7.

Iranian President Hassan Rouhani said on October 7 that Tehran has told its two northern neighbours Azerbaijan and Armenia "clearly and precisely" that they must avoid turning their conflict into a regional war. "We should be terribly careful this conflict does not turn into a regional war, because definitely nobody would profit from that," he said on state television.

Referring to reports of mercenaries from Syria joining the fighting, he added that Iran would not allow states to “send terrorists to our borders under various pretexts”.