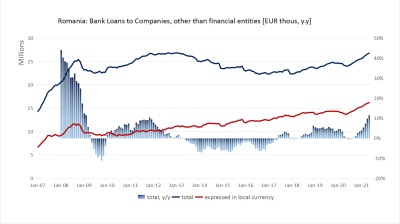 Bank lending is gaining momentum in Romania, partly driven by the government’s schemes aimed at helping small and medium-sized companies (SMEs) recover after the crisis, but at 26.8% of GDP at the end of 2020, the stock of loans “is a real concern,” according to the central bank governor Mugur Isarescu.

The “euroisation,” namely the denomination of bank loans in foreign currency, has constantly lost momentum and the local currency denominated loans rose by 15.4% y/y at the end of May, from 13.5% y/y one month earlier and 8.5% y/y at the end of 2020.

As a result, the share of foreign currency denominated loans contracted to 29.4% at the end of April from 32.7% one year earlier.

Another visible development is the more robust corporate lending in the post-crisis period — in sharp contract not only to the crisis episode, but also to the pre-crisis period when the main focus of the banks was retail (mortgage) lending.

The bank loans extended to companies, expressed in local currency, increased by 20.2% y/y at the end of May 2020, compared to the 1.4% y/y contraction posted one year earlier in May 2020.

The decline is relevant but moderate, and therefore the euroisation remains significant, with a visible impact on the central bank’s careful exchange rate management.

Another issue pointed to by Isarescu in a speech on June 23 is the weak level of financial intermediation. Even if the statistics do not capture particularities (because they do not include the credit obtained directly from foreign banks or the one provided by non-bank financial institutions) the bank loans to GDP ratio is very low and represents a real concern for all experts, Isarescu stated.

With the development of the banking sector and the fall in inflation after 2000, intermediation increased dramatically to a maximum of about 40% of GDP in 2008-201; after the adjustments imposed by the global financial crisis it has significantly decreased, reaching a minimum of 25.3% in 2019, Isarescu explained. It started to increase slightly again to 26.8% in 2020, but also as a result of the decrease of the gross domestic product.