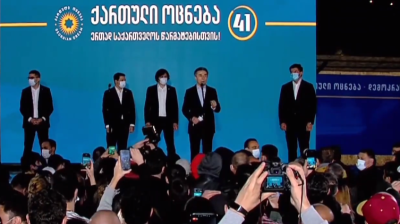 Georgia’s ruling party, oligarch Bidzina Ivanishvili’s Georgian Dream, is all but certain to secure a majority in parliament following the country’s October 31 general election, giving it a third consecutive mandate.

The results by late on November 1 translated into 75 sets for Georgian Dream, one short of a majority, but runoff voting will be held in 16 of the constituencies designed for majority voting, thus gaining the required seat is all but a formality.

Preliminary results showed the ruling party winning 61 of the 120 seats distributed according to lists subject to proportional voting, while its candidates also won outright 14 of the 30 constituencies decided by majority voting, by picking up more than 50% of the vote. The other seats will be decided by second round voting on November 21.

"It is impossible to say that the elections were free. There are serious question marks regarding the legitimacy of this election. I see the problem of legitimacy, the boycott of Parliament is one of the options that is really being considered, however the final decision will be made after consultations within the party. We, European Georgia, will definitely take part in the rallies [against the poll outcome], because we owe it to the people who saw that their will was not fully reflected in the ballots and results," Kapanadze added.

International observers gave a preliminary assessment that the ballot, with a voter turnout of 56.7%, was “competitive”.

“The elections were competitive and, overall, fundamental freedoms were respected,” according to the joint statement of preliminary findings and conclusions of the international observers from the OSCE Office for Democratic Institutions and Human Rights and the Parliamentary Assemblies of the OSCE, Council of Europe and Nato.

The statement, however, also noted: “The line between the ruling party and the state was often blurred, contrary to OSCE commitments and good practice. Georgian Dream representatives made a number of announcements during the campaign, which contributed to this impression, and was widely perceived as vote-buying.”

Some signatories of the joint statement expressed more nuanced views.

“In your country, a lot of money is spent during the election campaign—but the country is poor [and] this poses a threat,” said the head of the delegation of the Parliamentary Assembly of the Council of Europe, Tiny Kox.

Osman Askin Bak, the Turkish head of the Nato PA delegation that was part of the OSCE mission, said it was a "competitive election" within a "sound electoral framework" in which "most procedures were followed."

"It was, however, far from perfect," he added.

Transparency International Georgia, an NGO that had deployed around 600 local observers, said the voting was "a step back for Georgia’s democracy compared with the 2016 parliamentary elections."

Georgian Dream chairman Ivanishvili congratulated his party'ssupporters, saying: "It needs to be emphasized that the Georgian Dream has won the elections for the third time. What our country wanted, a solid team, we have got it."

According to preliminary data from all precincts, nine political entities exceeded the 1% proportional threshold.