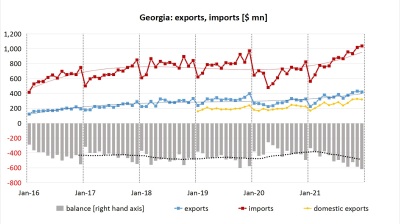 Foreign trade activity has gained momentum in Georgia along with the global trend in 2021, starting from the low base of 2020 – when the pandemic disturbed the global production and trade chains.

Notably, out of the $4.24bn exports of Georgia, only $3.13bn (+30% y/y) are “domestic exports” while the rest consist of goods imported and re-exported. The category of motor cars is the most representative for the re-exported goods: $457mn in 2021.

The exports of ferroalloys nearly doubled (+94% y/y) to $477.5mn and they were entirely domestic exports.

The category of goods with the largest share in Georgia’s exports was that of copper ores and concentrates – $815.4mn (+4.7%), entirely domestic exports.

Wines are the third-largest export category for Georgia and in 2021 the country marked another record: $239mn total exports, out of which $238mn were domestic exports (+13.7% y/y).

Poland’s unemployment rate falls to lowest point since 1990
15 hours ago
Hungary’s jobless rate inches down to 3.5% in May
3 days ago
Polish retail sales growth eases to 8.2% y/y in May
4 days ago
Ruble rises to seven-year high, best performing currency in the world
5 days ago
Polish PPI inflation accelerates to 24.7% y/y in May
5 days ago