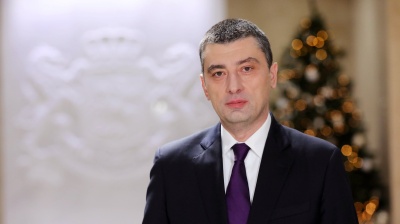 Giorgi Gakharia has stood down.
By Iulian Ernst in Bucharest February 18, 2021

Gakharia said the step was a move on which he failed to reach a consensus with ruling Georgian Dream party colleagues and risked inflaming political tensions—since last autumn’s general election, the opposition parties have refused to take their seats in parliament, claiming the poll was fixed in Georgian Dream’s favour. The resignation of Gakharia came after police were blocked from entering the headquarters of main opposition party United National Movement (UNM) in Tbilisi, where Melia and hundreds of his supporters had barricaded themselves, according to local media reports. 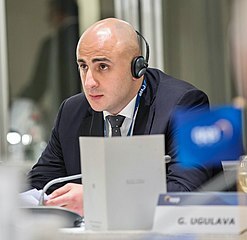 Georgia’s interior ministry said on February 18 that Melia’s detention had been “temporarily postponed” in light of Gakharia’s decision to resign. Melia was ordered into pretrial custody the previous day after failing to post bail or agree to wear an electronic tag on charges of inciting violence at anti-government protests in Tbilisi in 2019. He responded that the charges—centred on a backlash to a decision by lawmakers to invite a Russian MP to chair a session in the parliament—were “absurd and fabricated”, while opposition groups in a joint statement denounced the decision to order the detention of Melia as “a dramatic escalation in political repression”, adding that they would “resist Georgian Dream’s obvious push towards full-blown authoritarianism”.

Gakharia, a former interior minister who became PM in September 2019, said: “Unfortunately, I could not reach a consensus with my team on this issue, so I decided to resign. I want to believe that this step will help reduce polarisation… because I am convinced that polarisation and confrontation are the biggest risks for the future development of our country.”

"Against the background of the resignation of the PM, the minister of internal affairs made a completely logical decision to temporarily postpone the arrest of Nikanor Melia," Irakli Kobakhidze, chairman of Georgian Dream, said at a briefing at his party’s HQ. At the same time, he called on Melia to obey the law.

"It is expected that the political council will convene tomorrow and a candidate for prime minister will be nominated," Kobakhidze also said.

Melia, his party and the other opposition parties renewed calls for a snap election. Street rallies are likely in coming days.

Gakharia also remarked that Melia “has never obeyed the law and called on the people to storm the parliament building on June 20 [2019]”. But he noted that his arrest would trigger threats to public health, in a seeming reference to the mass protests Melia would attempt to organise in response, amid the ongoing coronavirus crisis.

The official general election results showed Georgian Dream won 48% of the vote, giving it 90 seats in the 150-seat parliament. The subsequent crisis that erupted after all the opposition parties rejected the vote as falsified has hurt Georgia’s reputation as a post-Soviet state billed as a functioning democracy.

Georgian Dream, founded by billionaire oligarch Bidzina Ivanishvili, who made his fortune in Russia, has pursued a policy of normalisation of relations with Moscow despite the anger still felt in Georgia over a short war in 2008 which resulted in the country losing around a fifth of its territory to Kremlin-backed separatists. Ivanishvili lately stepped down as chair of Georgian Dream.

The pro-EU, Atlanticist UNM takes a harder line on relations with Russia than Georgian Dream but it has not been in power since its time in office from 2004-12.

Georgia’s public defender, a constitutionally independent judicial watchdog, earlier this week said that the arrest of Melia would be unjustified, stating: “The arrest of the leader of an opposition political party without proper justification… is similar to the practices of non-democratic countries”.

After the court order was announced, the US urged Georgian authorities to act peacefully. Its embassy in Tbilisi said: “The current dangerous situation following the Melia ruling stems from decades-long problems with the electoral system and the judicial system. It is imperative the authorities and opposition exercise maximum restraint this morning. The way to address the important issues at stake is through peaceful negotiation. We urge all involved to remain calm and avoid violence.”

EU downgrades its estimate of Russian troops on Ukraine’s border to 100,000 but tensions remain high
6 hours ago
PM scandalises Bulgarians by wearing skimpy shorts to present new government
7 hours ago
Strong hopes Georgia's political crisis is over after EU brokered agreement
15 hours ago
Bulgaria’s outgoing government under scrutiny over sudden hike in budget deficit
1 day ago
Team Navalny pulls the trigger on the next big demonstration scheduled for April 21
1 day ago