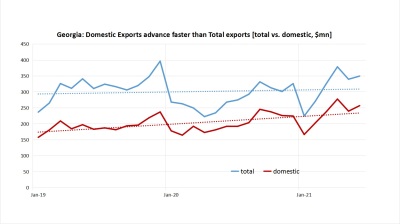 Georgia’s domestic exports, which exclude re-exports that account for a significant part of headline exports for a transit country such as the South Caucasus state, increased by 10.2% y/y in June, and by an impressive 18.5% compared to June 2019, to $257mn.

Against the first half of 2020, Georgia’s exports, at $1.38bn, rose by 27.8% y/y and, more importantly when it comes to the long-term trend, they were 24.2% up compared to 1H 2019, according to statistics office Geostat. Furthermore, the rise was distributed across many categories of goods that contribute to export diversification.

In terms of countries of destination, among the four main markets, three of them (China, Russia and Turkey) increased their share in total exports to a combined 49.6%, while Bulgaria lost ground to 8.9%.

Domestic exports accounted in June (and in the entire 1H) for 73% of exports - still a high share compared to the pre-crisis period (59% in June 2019, 62% in 1H 2019), indicating that the country is recovering faster than foreign trade in general in the region.

Notably, Georgia’ domestic exports weathered the COVID-19 crisis particularly well, as they were 5% up y/y in June 2020 and boasted positive growth rates during the second half of last year. In contrast, they performed somehow less impressively in the first part of 2020.

Total exports, released by Geostat last week, posted a more modest performance; namely they edged down by 0.2% y/y in June 2021 while they were 6.1% above the performance of June 2019 - still robust enough to inspire confidence.