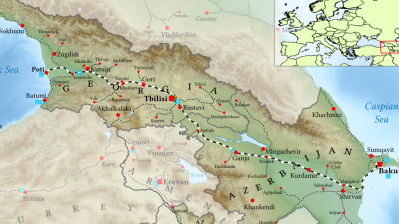 Investors lined up for the Anaklia investment are keeping a close eye on events slightly further south on Georgia's Black Sea coast in Poti, a port city that enjoys a rail link that runs to it from Baku via Tbilisi.
By Iulian Ernst in Bucharest June 2, 2019

The answer to the question of whether the Anaklia Development Consortium (ADC) will opt to shelve its plans for a $2.5bn flagship deep-water port in Georgia because of government support for a rival Black Sea development became even more difficult to determine following developments at the end of last week.

ADC, which groups Georgian and US investors among others, warned on May 30 that it was “on the verge of stopping” its project in Anaklia because, in a “shocking” move, Georgia’s economy and sustainable development ministry was set to issue a permit for port construction in Poti, a location a little further south on Georgi’aBlack Sea coast.

However, later on May 30 Georgian Economy Minister Natia Turnava announced that a deep-water port in Poti would not be built as the permit green-lighted for the port had been cancelled, according to a report put out by Agenda.ge.

Notably, however, Turnava did not categorically state that the Poti project—essentially a $250mn first-phase northward expansion of the port funded by “European investment” based on a conceptual design drawn up by APM Terminals Poti, controlled by Maersk group, and the Poti New Terminals Consortium—will not eventually be permitted to proceed.

“Not a construction permit”
Turnava was cited as saying: “First of all, I would like to say that this document [for the Poti investors] is not a construction permit. This is the document on the pre-conditions for land use issued by one of our agencies, namely, by the order of the head of the Agency for Construction and Technical Supervision—this issue was not agreed upon with any member of the government or with me, personally.

“In addition, as it turned out, the document was issued through a violation of certain procedures. Therefore, today we have made a decision to cancel this document, and the head of the agency has been dismissed from his position.”

Jitters have been felt at ADC about the future of its port investment throughout this year given tensions that have emerged between Georgia’s richest person—and, in the eyes of some observers, a former PM who remains the country’s de facto leader—Bidzina Ivanishvili and Mamuka Khazaradze, one of the two principal partners in ADC and co-founder of the country’s most influential business group TBC Holding, most known for its FTSE-25o-listed TBC Bank. But focusing on this clash might lead to too simplistic an interpretation of events.

The Russians already control the oil terminal at Poti port and definitely do not want a competitor to emerge to Russia’s Novorossiysk port, the nearest Black Sea deep-water port to Georgia. Gaining control of developments at Poti, therefore, might be a tactical move for Moscow. China, meanwhile, might in principle be interested in ensuring any port project at Anaklia falls under its ownership in order to secure itself a trade hub linking through to Europe under its Belt and Road trade infrastructure initiative.

Interestingly, the Georgian economy minister under whom the now cancelled permit for Poti was processed, Giorgi Kobulia, was dismissed in April. He had previously worked for years with McKinsey in Moscow, and there was speculation that his ties with Russia led to his dismissal. But he could not alone be held responsible for the support given to Poti that is seen as beneficial to Russia.

In February, a preliminary contract for the financing of the Poti project, drawn up with the Overseas Private Investment Corporation (OPIC) of the US, was signed at a ceremony attended by Georgia’s President Salome Zurabishvili and the country’s PM Mamuka Bakhtadze. The money involved, $50mn, is, however, plainly insufficient to finance anything hat could rival the $2.5bn ADC project. In fact, experts pointed out as long ago as January last year that the financing for the entire Poti project is disproportionately small compared to its ambitions.

Deterring investors
Poti aims at achieving half the volume the Anaklia project is targeting: 50mn tonnes per year compared to 100mn tonnes. This might make the Poti project look like a threat that is useful in deterring investors in Anaklia, but not something that will realistically ever be developed. Not that Poti does not have the potential for a deep-sea port. If the permitting comes through, it could be on track to gain one.

Over at Anaklia, China could be manoeuvring to take over the ADC project, which profiles itself as constructing what will be the first deep-water port on the eastern shore of the Black Sea. Could it be that Beijing is pressuring Tbilisi to oust the Georgian-American developers? That’s the scenario floated by Portseurope.com.

China’s foreign minister in May paid a historic visit to Georgia. It was the first time in 23 years that the top Chinese diplomat had arrived in Georgia on an official visit. “Cooperation in the fields of trade, logistics and transport” were high on the agenda, reportedly. The $600mn that ADC is striving at the present time to attract in financing would be no obstacle to China.

Blessings for Poti
The Georgian government cannot argue that it has not given blessings to the Poti project. The PM and president attended ceremonies during which OPIC extended the $50mn loan for the investment: too little to develop a deep-water port, but enough to discourage potential investors contributing to Anaklia. PIC, it should be noted, extended the financing to an entity other than the consortium that signed the memorandum of understanding with AMP Terminals for the expansion of Poi port. It lent the money to Pace Group—possibly part of the consortium, but possibly not (the consortium has not disclosed its structure).

APM Terminals in January this year presented the Poti project as aimed at achieving a “deep-water mega port” in partnership with Poti New Terminals Consortium (sometimes referred to as PNTC)—a consortium that describes itself as “a group of Georgian and foreign businessmen”.

PNTC’s president is Tamaz Chkhikvishvili, a businessman who was heading the state trade company “Tbilisi” in 1989 when Georgia begun the process of separating from the USSR. He later developed partnerships with foreign companies to operate numerous terminals at Poti port. One of his companies was involved in the construction of the Baku-Tbilisi-Ceyhan (BTC) oil pipeline that runs to Turkey via Georgia.

On completion, the fully built-out mega-port envisaged by APM would have an annual cargo throughput capacity of 50mn tonnes and 2mn TEUs. With a water depth of up to 16 metres, the port would be able to accommodate the largest vessels traversing the Black Sea. An adjacent industrial and free trade zone would complement the development.