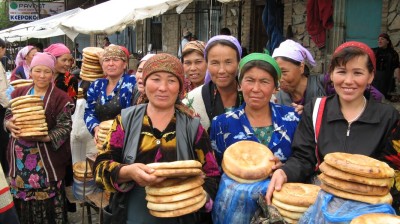 Things are opening up and looking up in Uzbekistan (Bread sellers pictured in Urgut).
By bne IntelliNews July 16, 2019

Uzbekistan’s closed-end fund Oltin is set to become the first internationally listed security to provide investors with exposure to the Central Asian nation undergoing an opening up and wave of economic reform. On July 23, the fund will be listed on the Specialist Fund Segment of the Main Market of the London Stock Exchange (LSE). The investment manager for the initial public offering (IPO) is Sturgeon Capital and the placing agent is Kazakh investment bank Visor Capital.

Oltin will be one of the only accessible securities offering exposure to Uzbekistan apart from the Uzbek sovereign eurobond issued earlier this year. Sturgeon is targeting a sale of 5mn ordinary shares and is hoping to raise €50mn at €10 a share. Uzbek broker Orient Securities, partnered with Sturgeon, will provide domestic support.

“It is as if the Berlin wall in Uzbekistan had fallen two-and-a-half years ago,” Clemente Cappello, founder and CIO of Sturgeon Capital, told bne IntelliNews. “They’re moving from a closed Soviet-type economy to a market economy that is integrated with the rest of the world. And traditionally the investors that have been early in these situations have done extremely well. We are trying to give investors the opportunity to do this without having to go to Uzbekistan, trying to set up a local brokerage account, where on the local market there is no liquidity.”

“We are also trying to be a vehicle to help local entrepreneurs access foreign capital,” Cappello added.

“Best in class companies”
Oltin will invest across various sectors that are expected to benefit from ongoing economic reforms and projected economic growth in Uzbekistan. According to Sturgeon’s IPO prospectus, it intends to aim for “best in class companies” with a focus on the quality of management and alignment with the interests of minority shareholders.

Sturgeon started negotiating with some of these companies while prioritising privately owned firms over larger previously state-run companies. Formerly government-owned companies tend to experience legacy issues and incentives for different classes of shareholders in such companies may not be as aligned as in smaller private firms.

These firms include insurance company Universal Sugurta, Universal Bank and Alliance Leasing along with a microfinance start-up, a retail software start-up, a niche agribusiness and a logistics centre.

The IPO is on the road until July 19.