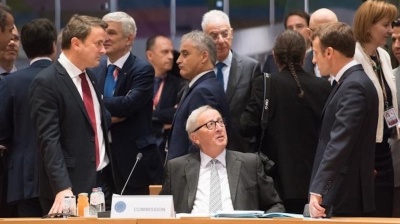 French President Emmanuel Macron (right) stood firm in his position that there must be reforms to the negotiation process and internal EU reforms before any decision is made on enlargement.
By Valentina Dimitrievska in Skopje October 19, 2019

France buried Albania’s and North Macedonia’s hopes of securing a date to open membership talks with the EU on October 18, as Paris is seeking more reforms before further expansion of the EU.

The launch of EU membership talks with Skopje and Tirana was delayed for the third time during the meeting of EU leaders in Brussels on October 17-19. The decision was first postponed in June 2018, then again in June 2019.

Head of the European Council Donald Tusk expressed disappointment about the negative decision following the EU leaders’ meeting, saying that the EU will revert to the issue before the Zagreb summit in May 2020.

EU leaders spent hours working to harmonise their stances on enlargement during the latest summit, but French President Emmanuel Macron stood firm in his position that there must be reforms to the negotiation process and internal EU reforms before any decision is made.

Macron also wants candidate countries to meet new targets in areas such as the economy and law and order to be able to join the bloc.

President of the European Commission Jean-Claude Juncker said that the negative decision is "a major historic mistake".

EU leaders were more inclined to allow North Macedonia to start EU accession talks as it is regarded as better prepared than Albania, and after it made painful concessions by changing the country’s name and thereby solving a long-standing dispute with Greece. However, France, Germany and Italy were against treating Skopje and Tirana separately.

Albania has launched the key judicial reforms required by the EU, and the fight against drugs trafficking and crime, but the country’s institutions are not functioning well. The main opposition Democratic Party has been boycotting the work of the parliament for months and did not participate in the June local elections.

“Overwhelming majority wanted to open accession talks with North Macedonia and Albania. However, such a decision requires unanimity, and there was no unanimity yesterday [October 17],” Tusk said in the statement.

However, Tusk sent a message to "Macedonian and Albanian friends: don’t give up!

“You did your share and we didn’t. But I have absolutely no doubt that you will become full members of the European Union,” the European Council head said.

EU Enlargement Commissioner Johannes Hahn also expressed extreme disappointment that Skopje and Tirana were not allowed to start accession talks. North Macedonia (formerly Macedonia) has been a candidate since 2005 and Albania since 2014.

“EU leaders failed to live up to their commitment,” Hahn said in a tweet.

All EU members except Denmark, France and the Netherlands were in favour of opening the accession talks, fearing that by not inviting the countries to start negotiations the union will send the wrong signals to the fragile Western Balkans region and destabilise it.

Senior EU officials are worried that not launching membership talks with Skopje and Tirana will increase Russian, Turkish and Chinese influence in the Western Balkans.

Government representatives and citizens in both countries expressed deep disappointment over the rejection.

Following the negative EU decision, North Macedonia’s President Stevo Pendarovski expressly said that the conclusions of the EU Council fell short of the country’s expectations and the previous EU promises.

“While we are disappointed we must soberly face the new reality,” Pendarovski said, adding that the country should continue reforms and the fight against organised crime and high-level corruption, and develop European values.

Pendarovski invited leaders of all political parties to a meeting on October 20 to discuss the issue and to reaffirm North Macedonia’s EU perspective.

“Now is the time to show unity around our strategic goals,” Pendarovski noted.

However, the leader of main opposition VMRO-DPMNE party Hristijan Mickovski called for a snap general election and the resignation of Prime Minister Zoran Zaev.

Zaev said before the EU leaders’ meeting that he would resign if Skopje failed to obtain a date to start EU membership talks, but he has not yet made a decision. Media reported that some EU leaders, including Bulgarian Prime Minister Boyko Borissov, told Zaev that it would be better for the country if he does not file his resignation.

For Albanian leaders the decision was expected as the Netherlands had openly said before the summit that it would not allow the start of talks with Tirana.

Prime Minister Edi Rama said that the decision was a result of EU internal problems and different approaches to the EU’s future among member states.

“We will continue to build European Albania in our country because that is what the whole process is about,” Rama said.

The latest delay of the EU enlargement process for North Macedonia and Albania is seen by experts as discouraging for the EU perspectives of all countries in the region.

Montenegro and Serbia have already launched EU membership talks. The prospects for Montenegro are brighter as the tiny country does not have unresolved issues with it neighbours.

However, Serbia needs to normalise relations with Kosovo, which is one of the most painful issues in the region, before making further progress in its EU path.

The last country that joined the EU was Croatia, in 2013.