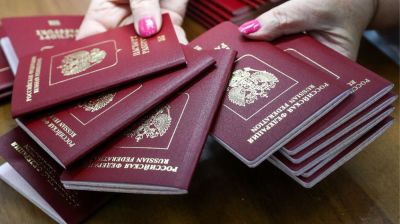 Russia has handed out over 200,000 Russian passports to the residents of Donbas
By FPRI August 6, 2020

Since the spring of 2014, Russia has handed out nearly 200,000 Russian passports to Ukrainians living in the Donbas and Luhansk “People’s Republics.” Although Moscow maintains that this is a “practical measure” motivated by humanitarian concerns, Kyiv considers it a further violation of Ukraine’s state sovereignty.

According to researcher Fabian Burkhardt, Moscow’s “passportization” efforts in Donbas are not only “part of a tried and tested set of foreign policy instruments,” but also a deliberate effort to create “controlled instability” in the region. “Russia wants to secure permanent influence over the two separatist territories without directly seeking annexation,” he explains.

As a geopolitical strategy, handing out Russian citizenship allows the Kremlin to “exert permanent pressure” on the authorities in Kyiv without any military escalation. This, in turn, “torpedoes the Minsk peace process,” while “the delay in conflict resolution contributes to making Russia comparatively more attractive as a country of emigration for Ukrainians.”

In other words, Russia’s “passportization” efforts seek to address a persistent domestic problem, as well. “The Donbas conflict area serves as a source of migration for counteracting, in the long term, both Russia’s population decline and shortages in its labour market,” Burkhardt explains.

As such, Burkhardt argues that both Ukraine and its international partners should respond by taking a critical look at their own policies towards the civilian population living in the Donbas. The EU and its member states should be playing a larger humanitarian role in the region, he says, in addition to recognizing their own contributions to population decline across Ukraine.

“The EU should also encour¬age Ukraine to implement existing plans to simplify crossing of the Line of Contact in the wake of the pandemic, to reduce bureaucracy in processing documents and using social assistance,” Burkhardt concludes. “The isolation of the [non-government controlled areas] caused by Covid-19 is a massive factor in [government-controlled] Ukraine’s alienation from them, which inevitably increases Russia’s influence.”

Putin calls for more and closer international cooperation at the United Nations General Assembly
Russian App to make sure your hands are clean
MITTELEUROPEAN INSIGHTS: Better $1.5bn from Russia or €1bn from the EU in the hand than $15-20bn in the bush?

TURKEY INSIGHT: Moody’s warns of autumn peril
20 hours ago
MITTELEUROPEAN INSIGHTS: Better $1.5bn from Russia or €1bn from the EU in the hand than $15-20bn in the bush?
21 hours ago
COMMENT: Ukraine’s the Old Rotten System is alive and well
5 days ago
STOLYPIN: Whatever is happening to Putin?
8 days ago
FPRI BMB Ukraine: Lawmakers’ promises, one year later
12 days ago