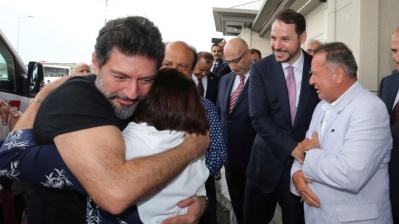 The Erdogan administration made a big event of the return to Turkey of Atilla, left, after he was released from a US prison. Among those greeting him was finance minister Berat Albayrak, second from right.
By bne IntelliNews October 21, 2019

Mehmet Hakan Atilla, the former executive of Turkey’s state-owned Halk Bankasi (Halkbank) who was jailed by a Manhattan court for his role in an Iran sanctions-busting money laundering scheme, was on October 21 named director general of the Istanbul stock exchange.

The appointment will no doubt be taken as an attempt to underline the Turkish Erdogan administration’s angry rejection of last week’s pressing of a criminal case in relation to the affair against Halkbank by the attorney general of the Southern District of New York (SDNY).

Turkey’s President Recep Tayyip Erdogan has claimed the affair is the result of a conspiracy mounted by his Gulenist opponents in an “international coup attempt”. The New York Times reported during the prosecution of Atilla that the investigation had “sent tremors” through Turkish political circles.

Turned to Obama, then Trump

Erdogan made attempts to get former US president Barack Obama to scrap the investigation into the bank and when those failed later turned to Obama’s successor Donald Trump with the same request. The bringing of the US criminal case against Halkbank is a huge matter for Erdogan “as it alleges wrongdoing right to the top of his administration”, analysts have said. Indeed, during the Atilla trial it was alleged that Erdogan himself had knowledge of some elements of the conspiracy as it took place, something the Turkish leader has strenuously denied.

Atilla, who was formerly Halkbank’s deputy general manager with responsibility for international banking, was named general director of the Borsa Istanbul by Berat Albayrak, the finance minister who is also Erdogan’s son in law. “The resting period for Hakan Atilla, who was reunited with his family and country following an unjust conviction, is over. He will start his duty as Borsa Istanbul’s Director General,” pro-government newspaper Yeni Akit quoted Albayrak as saying.

Atilla was sentenced to 32 months in prison following his conviction for helping Iran evade US sanctions. He was released and returned to Turkey earlier this year.

Erdogan has called the SDNY charges “unlawful, ugly”, and last week told reporters in Ankara that before the announcement of the indictment the Halkbank issue was “supposedly closed”.

The indictment against Halkbank accuses the lender of participating in a wide-ranging plot to violate prohibitions on Iran’s access to the US financial system. The conspiracy allegedly involved high-ranking government officials both in Iran and Turkey, it said.

“Halkbank’s systemic participation in the illicit movement of billions of dollars’ worth of Iranian oil revenue was designed and executed by senior bank officials,” US Attorney Geoffrey Berman in New York said in a statement detailing the case. “Halkbank will now have to answer for its conduct in an American court.”

Early in Trump’s term, former New York Mayor Rudy Giuliani was hired by the central figure in the case, Reza Zarrab, a flambouyant Iranian-Turkish gold trader, who in the trial implicated Erdogan in the sanctions-evasion operation. Giuliani conducted a shadow diplomacy effort to win his client’s freedom and on Giuliani’s behalf, Trump asked a member of his cabinet to steer prosecutors away from the case.

Several months after the sanctions-busting trial of Atilla ended with his conviction in early 2018, US officials entered into talks to negotiate a possible penalty with the bank. But no settlement was announced and the broader case seemed to go dormant.

Zarrab has related in court how he helped Iran tap funds from overseas oil sales that were frozen in foreign accounts. He pleaded guilty having become the star prosecution witness against Atilla.

US prosecutors allege that Halkbank became an essential participant in the plot, which was designed to secretly launder funds out of Turkey to Dubai. There, money could be shifted into the global financial system and made available to Iran. Prosecutors at the Atilla trial showed how Iranian funds were converted to gold, exported to Dubai, sold for cash and then distributed to the benefit of Iran. Around $1bn was converted into US dollars and transferred through banks in New York, they said.

Zarrab, who is married to a famous Turkish singer, is apparently extremely wealthy. US court documents said he was building a yacht longer than a football field with three personal submersibles.