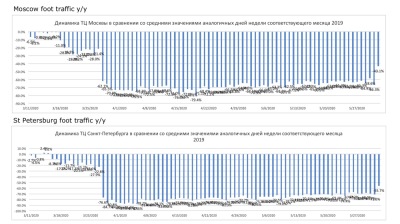 Foot traffic in Moscow's leading malls has visibly recovered since the start of this week, as Russia's rebound gets underway
By bne IntelliNews June 4, 2020

Foot traffic volumes had collapsed by 65%-75% year on year during the lockdown, but rebounded on June 1 and were down only 43.1%, according to Watcom, which uses cameras to measure foot traffic at leading Russian malls in real time.

As bne IntelliNews reported, the recovery in shopping traffic is part of a broader visible Russian rebound that has got underway in the last few days and seen the ruble break below RUB70 to the dollar for the first time in months, among other things.

Since the lockdown was imposed in Moscow on March 30, foot traffic fell by 70% less y/y overnight and has stayed there. Since then, the strict regime in Moscow kept traffic to a minimum, where residents were only allowed out to shop at a local store, take out the rubbish or walk the dog.

St Petersburg saw a similar pick up in foot traffic to -55.7% on the same day, Monday June 3, compared with the -71% y/y the preceding day. Russia’s northern capital has followed Moscow in seeing a slight improvement in the volumes of foot traffic in the last week as the end of restrictions came in sight, but in general residents in St Petersburg have been a little more cautious than Muscovites.

Retail has been on the front line during the coronacrisis. Retail sales were down a massive 23.4% y/y in April, the state statistics agency said on May 27. However, analysts expect retail turnover to recover in the second half of this year.