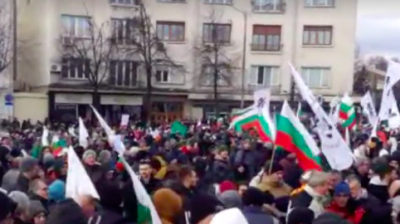 Hundreds of Vazrazhdane supporters came from across Bulgaria to join the protest. / Vazrazhdane
By Denitsa Koseva in Sofia January 12, 2022

The party has been dubbed the ‘vaccinated anti-vaxxers’ after bTV revealed recently that one-third of its MPs have been vaccinated, even while claiming they would never do so.

They still managed to gather hundreds of supporters from across the country to protest against the measures at a time when the number of new coronavirus cases has spiked, passing the 7,000 new cases in 24 hours on January 12.

A dozen protesters breached the police cordon and tried to enter the parliament. However, the police quickly regained control and prevented the break-in, a video live broadcast by Dnevnik news outlet showed.

Meanwhile, the national security service used tables to barricade some of the parliament’s doors and strengthen them in case of new attacks, according to photos shared by Dnevnik. General Emil Tonev, the head of the service that protects top public figures, went personally to parliament to lead the defence efforts.

Four policemen and several protesters were wounded during the clash, according to the interior ministry.

“Resignation” and “Down with the measures” were the most popular chants from the protesters, who were not wearing face masks, defying the restrictions. They claimed the virus was made up or not as severe as stated by the authorities.

Bulgaria remains the least vaccinated EU member state with only around 30% of the population having a complete vaccination cycle. Prime Minister Kiril Petkov has set the goal of persuading 75% of people to get the jab.

As the Omicron variant of the virus spreads rapidly across Europe, Petkov is currently in quarantine along with most other political leaders after they attended a national security council where one of the participants – parliament speaker Nikola Minchev – tested positive after the meeting.

In an interview with bTV, Petkov said on January 12 he is willing to discuss the measures with ten representatives of the protesters after his quarantine ends. As the prime minister has had a booster dose, he will be allowed to end his quarantine by the end of the week if he provides a negative PCR test, according to the new rules.

The protest, which Vazrazhdane claimed that would gather tens of thousands of supporters, failed to turn into a mass event. The far-right party’s anti-vaxxer credentials suffered in the last few days after bTV revealed that four of its 13 MPs are fully vaccinated. The news came amid claims by some of the vaccinated MPs they would accept the jab only if they were threatened with a gun. Party members have repeatedly spoken out against vaccines, calling them “experimental liquids”.

The news immediately made the party the butt of online humour. “In Bulgaria, even the anti-vaxxers are fake,” one of the most popular jokes circulating on Facebook says. Some people called Vazrazhdane ‘trans-vaxxers’, referring to their homophobic rhetoric.

The party’s vaccinated MPs claimed their vaccine status was personal information and said that they do not call on people not to vaccinate themselves as this is a personal choice. Moreover, they argued that what the party objects to is the restrictions, and that even though they have COVID-19 certificates, they are not using them. These explanations were accepted by Vazrazhdane’s supporters but not by others, who have accused the party of hypocrisy and attempting to gain support with lies.

Vazrazhdane is the smallest party in parliament and the only far-right political formation that passed the 3% threshold in the November 14 general election.