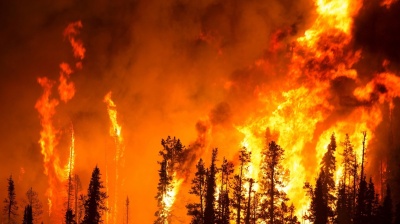 The remote Siberian city of Yakutsk is under threat from thick toxic smoke, following fierce forest fires caused by a heatwave in one of the world’s coldest regions.

Raging fires have been an increasing occurrence in Siberian summers, with the trend widely attributed to climate change, which has caused temperatures in the vast Taiga forest to spike each year. Local authorities warned on July 20 that Yakutsk’s 320,000 residents should stay indoors to avoid inhaling the fumes. Live air quality monitors that day for Yakutia measured levels of PM 2.5 of 395 micrograms, which are small particles that can enter the bloodstream and damage organs.

The head of the Yakutia region, Aisen Nikolaev, has blamed the unprecedented extent of the fires this year on global climate change.

“We see that it is getting hotter every year in Yakutia,” he said in comments cited by RIA Novosti. “We are now living in the hottest, driest summer [there] has been in the history of meteorological observation in Yakutia since the end of the 19th century.”

Russian has started seeding clouds to bring down rain to help extinguish the fires, which have already torn through over 1.5mn hectares of land. The local airport has also suspended flights. Authorities have also warned that the fires are dangerously close to a hydroelectric power plant (HPP).

The Copernicus Atmosphere Monitoring Service, part of the EU observation programme, has estimated that in less than two months, fires in Yakutia have emitted roughly 150 megatons of CO2 equivalent, which is almost as much as the 2017 fossil fuel emissions of major oil producer Venezuela.