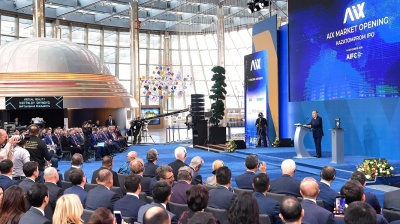 The bond, dubbed the “Falcon Bond”, has been issued by China Construction Bank Corporation Astana Branch (CCB Astana Branch). The bond was also listed on the Hong Kong Exchange.

The bond with an interest rate of 2.95% per annum is set to mature in March 2022, in the amount of CNY1bn (€129mn). The “Falcon Bond” is only available to professional investors, the statement said. The funds raised from the yuan bond will be used for general corporate purposes concerning China’s Belt & Road Initiative (BRI) projects in Kazakhstan along with local infrastructure projects. BRI is seeking to develop infrastructure in order to transform Kazakhstan into a transit zone for Chinese goods heading to Europe and vice versa.

The AIFC has been seeking to become a regional centre for Chinese yuan-based clearing and settlement, the statement noted.

AIX Belt and Road Market is the key part, where RMB securities, including bond, equities and other products can be listed and traded. AIX is expecting more RMB issuances from diversified issuers which will contribute to establish AIX as the RMB securities listing and trading center for Central Asia.

CCB Astana Branch is the first foreign commercial bank’s branch registered under AIFC jurisdiction. The bank was appointed as an RMB clearing bank in AIFC in 2019.