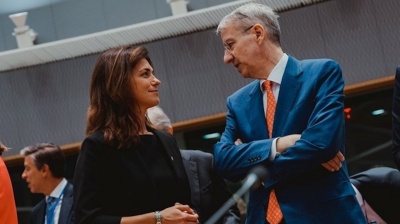 Hungary’s incoming Justice Minister Judit Varga was grilled at the first hearing by EU affairs ministers as Finland pushes ahead with proceedings against Hungary after taking over the rotating EU presidency.
By bne IntelliNews September 17, 2019

As promised before assuming the European Union rotating presidency, Finland moved forward with the proceedings against Hungary. A year ago, the European Parliament approved a report triggering what is often referred to as the "nuclear option" against the government which could ultimately strip the country of its EU voting rights.

The report put forward by former Dutch Green MEP Judith Sargentini highlighted  the "existence of a clear risk of a serious breach by Hungary of the values on which the Union is founded".

The report says that the Hungarian government had curbed the powers of the Constitutional Court and judicial independence and launched attacks against civil society. The state of press freedom and freedom of expression have also deteriorated.

The Orban cabinet has pursued a policy since 2010 systematically undermining the operation of the democratic system in Hungary, it added.

The government has tried to play down any criticism over the rule of law and link it to migration and what it sees as attacks on Christian values.

"The day of the hearing has come, where, once again, we are put on the pillory for rejecting mass #Immigration. However, the facts are on our side. We protect #Hungary," Varga wrote on September 16.

Prime Minister Viktor Orban called the report an insult to the Hungarian people and lawmakers passed a resolution condemning it. The country also challenged the approval of the report in the Court of Justice of the European Union (CJEU) because of the procedural violation. The author of the report, Sargentini, came under a slander attack by pro-government media.

Lately, the Hungarian Prime Minister has often used the term "Christian freedom", as opposed to liberal freedom, which in his view is represented by EU

Central Europe has managed to repel the attacks by liberals threatening Christian freedom and seeking to give up Europe’s Christian culture, Orban said at a weekend congress of the Federation of Christian Intellectuals. Further, it could halt migration, "an external threat to Christian freedom".

The spring rally that got under way at the start of the new year has received a boost from Russian President Vladimir Putin's proposed constitutional changes and the appointment of a new government, as both the RTS and Moex Russia index hit new highs

Prime Minister Ludovic Orban cited the EU's new Green Deal rather than security issues or cost concerns circulated previously as the main reason behind a potential end of the deal with CGN.

Two democratic US congressmen urged Polish President Andrzej Duda to prevent the so-called "muzzle law" from being pushed through parliament, describing it as a “dangerous threat to Poland’s democratic institutions.”