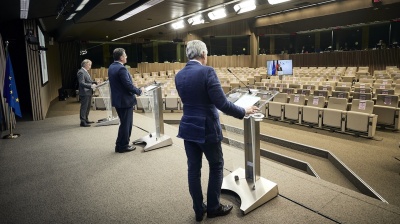 EU ministers of European affairs failed to agree on the launch of accession talks with Albania and North Macedonia on November 17.

North Macedonia’s EU bid was blocked by Bulgaria, and for Albania EU ministers expressed willingness to approve the start of talks only once it meets conditions that include enabling the Supreme Court to do its work and implementation of the new electoral law.

Zaharieva was cited by Dnevnik.bg as saying that the veto was placed as three conditions set for Skopje by Sofia were not included in the negotiation framework.

“At this stage we cannot approve the negotiating framework for North Macedonia as it does not reflect Bulgaria's demands,” Zaharieva said.

The Bulgarian conditions concern the naming of the Macedonian language, a roadmap for the implementation of the 2017 Friendship Agreement and a clear confirmation that North Macedonia has no claims over the Macedonian minority in Bulgaria.

For Albania, on the other hand, Bulgaria believes that it fulfilled most of the conditions set in March by EU leaders.

However, Albania has its own opponent within the EU, the Netherlands, which earlier this month underlined that Tirana needs to meet all conditions set by the EU Council before the start of the EU accession talks expected in December.

Bilateral disputes are not part of the criteria for North Macedonia’s EU membership or the start of the negotiation process, but Bulgaria wanted this to change, at least at the level of the negotiating framework, which was not accepted by other EU member countries.

German Minister for Europe and chairman of the EU Ministerial Meeting Michael Roth said that Germany supports North Macedonia and the enlargement process must not be held hostage to bilateral issues.

Roth added that the EU will not cease to help Skopje and Sofia to resolve their dispute by the end of this year in order for the negotiating framework to be adopted during the German presidency.

The position of North Macedonia’s officials is that the talks with Bulgaria will continue until the last moment, but not if the Macedonian language and identity are included in the talks.

North Macedonia Prime Minister Zoran Zaev said he is very disappointed about the veto, saying that this is the “biggest defeat” for Europe.

“We should continue to make efforts, in the spirit of building friendship, dialogue, not conflicts. It is very difficult for me, because I believe that this is not the wish of the Bulgarian people, but of politics before the elections in Bulgaria," Zaev was cited by 21TV.

Government sources were cited by media as saying that the veto is a failure of the EU enlargement policy, a bad message for the whole region and a defeat of the fundamental European values and principles, but that the government is committed to continuing on the EU path.

“There are no alternatives to the EU, we will continue to work in that direction,” government sources were cited in the media.

According to the government, Bulgaria's refusal to approve the negotiating framework is not in the spirit of good neighbourly relations and it breaches the Friendship Agreement.

Foreign Minister Bujar Osmani is still optimistic. “We missed this chance, but we have another chance until December to approve the negotiating framework,” he said.

Analysts in Skopje warned that Bulgaria's veto may cool relations between the two countries for a long time, inflame nationalism in North Macedonia and intensify Euroscepticism.

“It can be concluded that these obstacles are insurmountable, so an alternative strategy for EU membership will be needed,” political analyst Aleksandar Krzalovski was cited by Sloboden Pecat.

Krzalovski underlined that authorities should draft a long-term strategy on how to reach EU standards without EU membership, even without membership negotiations.

North Macedonia, formerly known as Macedonia, has been an EU candidate country since 2005, but its EU journey was prolonged due to the constant blockades by its southern neighbour Greece. The long-running name dispute between the two countries was solved in 2018 by changing the name to North Macedonia, which opened the way for the country to become a Nato member in 2020 and come a step closer to opening EU accession talks.

Now Bulgaria seems to be a new obstacle for North Macedonia, presenting a problem which is far more difficult to solve if the authorities in Sofia fail to soften their stance, which is not in line with the EU democratic values.

Albania still has to meet conditions

German Minister Roth said that there are two outstanding issues for Albania which are part of the Council conclusions from April.

“First of all, it’s the Supreme Court’s ability to do its work, and secondly, implementation of the new electoral law,” he was cited by Exit.al.

Roth said that the issue of the High Court will take some time, and that he wasn’t sure whether the two conditions will be met by Albania before 2020.

“Of course, in a polarised country like Albania there are political conflicts, this is true of many countries. It’s difficult to achieve a consensus on the electoral law but Albania is on the right track. Whether we can reach a successful conclusion by the end of the year is something I can’t say yet,” he said.

Albanian Prime Minister Edi Rama blamed the possible failure of the start of EU talks on elections taking place in some EU countries in 2021, and particularly in the Netherlands, according to Exit.al.