EU imports of Russian gas surge in January, despite objections to Nord Stream 2 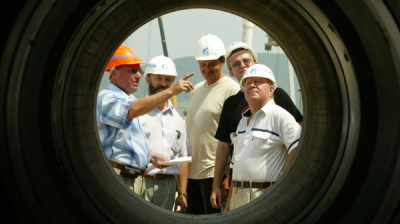 Exports of Russian gas to Europe surge on the back of a cold snap in January
By bne IntelliNews February 18, 2021

As leading EU countries lobby Germany to stop the construction of Nord Stream 2, the same countries have been dramatically increasing their imports of Russian gas as a cold snap sweeps the Continent, according to Russian national gas company Gazprom’s financial accounts.

France has been one of the most vocal critics of the new pipeline that will connect Russia’s Yamal gas fields with Germany, but it has bought 43% more Russian gas so far this year, according to Gazprom’s books, RT reported.

The unusually cold weather in the last few months has worked to undo the gas glut that built up during last year’s heating season when the winter was mild.

That was compounded by uncertainty over whether Russia and Ukraine would renew their gas transit deal, which led both sides to build gas reserves in storage in case a deal failed to transpire. Likewise, European countries anticipating a break in gas transits from Russia also built up reserves in underground facilities. Gazprom’s books have revealed that France’s underground gas storage facilities are less than 30% full and that it has turned to Gazprom for more fuel.

“Gazprom has increased its exports to France by almost 1.5 times since the beginning of the year,” Gazprom said in a report. “The demand for natural gas in European countries against the background of a cold, frosty winter continues to grow, and the occupancy of European underground gas storages continues to shrink.”

The surge in demand has also had an impact on the price of gas, which has almost doubled in the last few months. Gazprom’s outlook for the key European gas market in 2021 has significantly improved according to analysts. 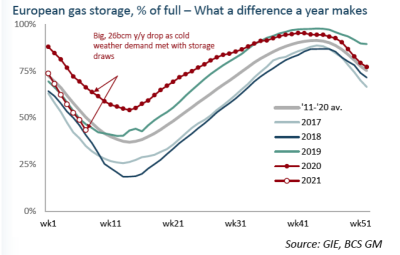 “This time last year, storage was at 74bn cubic metres, or c66% full, 10ppts above the 10-year average of 56% full in mid-February. It presaged a difficult 2020 – LNG battled pipe gas for storage, driving gas prices driven to historic lows of c$1/mmcf (c$35/mcm). Situation began to right itself in December. The situation began to correct in December with severe cold in NE Asia and continued with cold air mass sitting over Central Europe for much of February. As of 14 February, storage had fallen to 42% full or to c48 bcm, a c26 bcm gap vs mid-February 2020.”

Gas exports are on the rise across Europe despite concerns over Nord Stream 2. Italian purchases have also grown by 112.7% so far in 2021, with Poland – one of Moscow’s harshest critics of the new pipeline – also increasing its imports by 63.7%.

The increase in demand will also improve Russia’s budget forecast. Gazprom exports' price forecast for 2021 was raised to over $200/mcm from the $170/mcm budgeted only in December, Kommersant reported, quoting Gazprom CFO Alexander Ivannikov.

All in all, Gazprom reported that non-FSU exports were up 36.5% year on year to 27.5 bcm for the first one and a half months of 2021. Gazprom booked additional capacity of 14.2 mcm per day for transit via Ukraine for March at an auction last week, Interfax reported.

Gazprom agreed to ship 40 bcm per year via Ukraine from 2021-24. Gas production in Russia decreased from 738.4 bcm in 2019 to 692.9 bcm in 2020, and its share of production in Russia decreased from 67.7% to 65.3%. Gazprom did not use the full 65 bcm quota booked for 2020 due to the large amount of gas in storage. However, this year the new deal calls for a reduction of transits via Ukraine to 40 bcm, but it already seems likely that Gazprom will use all of that quota and more.

The gas glut of last year is already unwinding as record high levels of gas storage begin to fall because of the cold weather. Underground storage in Europe is 47.9% full vs. 68.2% full in February 2020 and 48.5% full at this time in 2019.

“The first quarter of 2021 is starting much stronger than expected, with demand likely coming in higher and prices likely to be above our previous forecast due to higher spot and Brent prices,” BCS GM said.