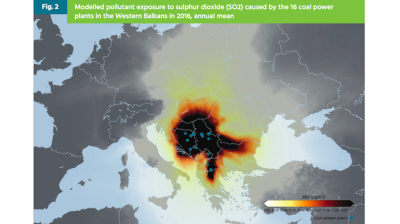 The environmental NGO Health and Environment Alliance (HEAL) has urged the Western Balkan states to close all existing and ageing coal-fired power plants and not to build new ones as they are a major source of air pollution to the EU.

A report, released by HEAL on February 19, pointed out that 16 outdated coal-fired plants in the six Western Balkan states are a public health and economic liability for the whole continent, with people in the EU bearing the majority of the health impacts and costs.

While Serbia is the single worst affected nation, with 570 premature deaths linked to air pollution, the study shows that EU member Romania follows with 380 premature deaths and Italy with 370. Overall,  2,013 of the total 3,906 premature deaths caused by emissions from Western Balkan coal power plants occurred in the EU.

The report noted that eight of the ten top polluters in terms of sulphur dioxide (SO2) emissions in Europe are located in the Western Balkans with the leader being Serbia’s Kostolac B with 128,000 tonnes of SO2 emissions in 2016.

“In 2016, the Serbian power plant Kostolac B surpassed Bosnia and Herzegovina’s Ugljevik becoming the most notorious sulphur dioxide polluter. Kostolac B and Ugljevik account for half of all the SO2 pollution from coal plants in the Western Balkan region. These two plants alone are responsible for around 25% of all coal SO2 emissions in the EU and the Balkans combined,” the report reads.

Serbia and Bosnia hold most of the places in this ranking where the third largest polluter is Serbia’s Nikola Tesla A, followed by Bosnian Kakanj and Serbian Kostolac A and Nikola Tesla B. Bosnia’s Tuzla coal-fired plant is ranked seventh, while Macedonia’s Bitola takes the eighth place. Two power plants in Poland and Bulgaria are also included in the ranking – Belchatow and Maritsa East 2.

“Desulphurisation technology in Western Balkan plants has either not been fitted at all or, in the case of Kostolac B in Serbia, it has been fitted but is largely non-functional, leading to enormous pollution,” the report says.

The NGO urged the EU to tighten the measures against Western Balkan states, pushing them to meet the EU emission criteria. It has also advised the EU not to finance construction of new coal-fired facilities in the Western Balkans.