Estonian inflation picks up to 2.4% y/y in August 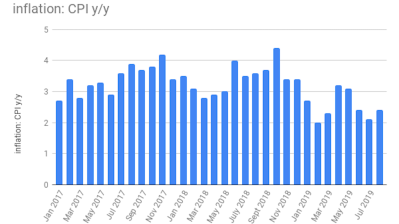 Price growth gained 0.3pp versus the annual CPI change recorded in July. CPI expansion was driven by fast-growing prices in the food and non-alcoholic beverages segment, which contributed 40% of the overall increase, the statistics office said. Prices expanded 4.6% y/y in the segment in August, compared to 4.4% y/y the preceding month.

Prices increased in most other segments in annual terms in the eighth month. Inflation came in at 5.7% y/y in recreation and culture, compared to an expansion of 5.6% y/y the preceding month.

In the housing segment, price growth accelerated to 2.1% y/y in August after expanding 1.2% y/y in July.

The transport segment saw prices increase 1% y/y in August, compared to a fall of 0.8% y/y the previous month.

Communications and alcoholic beverages and tobacco were the only segments to see prices drop in August, at 1.9% y/y and 1.8% y/y, respectively.

In monthly terms, consumer prices gained 0.7% in August, driven by a growth of 2.4% m/m in the transport segment. That follows a fall of 0.1% m/m the preceding month.

The outlook for price growth in 2019 remains moderate. Inflation is expected to ease in 2019 to 2.4%, according to the latest forecast by the European Commission. Swedbank’s forecast price growth of 2.3%, as does SEB. CPI grew 3.4% last year.