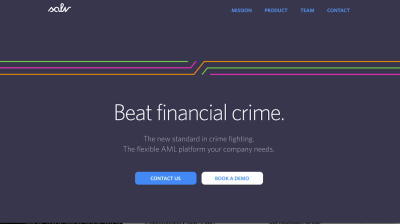 FlyVentures, Passion Capital, and Seedcamp provided the bulk of the financing, with a number of angel investors also chipping in. Salv, which was founded by former employees of TransferWise and Skype – both worldwide-renowned tech companies that also originated in Estonia – offers solutions to banks to help fight financial crime.

Another Baltic state, Latvia, is also striving to improve its reputation as an entry point into the EU for dirty money from the east, Russia in particular.

“The idea, says co-founder and CEO [of Salv] Taavi Tamkivi, is to move [anti-money laundering measures] beyond just compliance to something more proactive that actually does defeat crime,” Tech Crunch reported.

“Today, between $1 trillion to $2 trillion a year is still laundered. The excessive regulations mean that nearly all of a bank’s compliance team’s effort goes into compliance. They have very little energy left to actually focus on improving their financial crime-fighting abilities. The software they’re using is similar, focused almost wholly on compliance, not crime-fighting,” Tamkivi told Tech Crunch.

The company has financed its sharp expansion over the last few years by aggressive borrowing. It is now eyeing the mobile telecommunication operations of Deutsche Telekom in Romania.