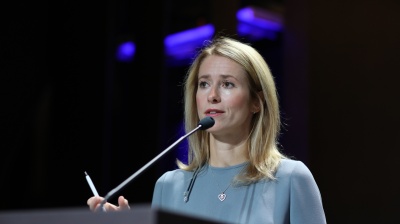 Reform Party leader Kaja Kallas will become Estonia's first female premier in a grand coalition government equally split between the liberal Reform and the centre-left Centre parties after an agreement hammered out over the weekend.

The new coalition government will take the oath of office in the country’s legislature Riigkogu on January 26 and will commence working remotely right away.

Kallas said she had aimed for gender balance. “I tried to strike a balance between different criteria. Gender balance matters to me as our ranks include a lot of capable women. It is also important for the new government to have both experienced and fresh members.”

Juri Ratas, chairman of the Centre party and former PM of the Centre-EKRE-ISMA government, will continue chairing the Centre Party and being a member of the Riigikogu but does not have a position in the government.

As reported by bne intellinews, the Centre-EKRE-ISMA government collapsed after the Estonian prosecutors launched corruption investigations into high-ranking officials in the Centre party.

The incoming cabinet has quite a few new faces, with Kallas and six other ministers having no prior government experience. “Looking at the choice of ministers, we need to keep in mind looming local government council elections. Bringing in new people allows both parties to expand their gallery of potential candidates, while freeing veteran politicians up to primarily pursue election campaigns,” Tonis Saarts, an Estonian political analyst, said.

Center also introduced people with no prior involvement in politics, while the step could be seen as a forced move to some extent. Interior and foreign affairs portfolios Center secured during coalition talks were in risk of becoming controversial in light of the party’s recent corruption scandal and past actions. That is why it was only sensible to man these positions with people from outside party politics, Saarts said. Notably, Northern Police Prefect Kristian Jaani will become interior minister and Estonian Ambassador to the Czech Republic Eva-Maria Liimets the new foreign minister.

The Center Party chairman put the proposal to Jaani this weekend. “I did not have a lot of time to mull it over and becoming the interior minister candidate of a party currently under criminal investigation for corruption offenses gave me a lot to think about, as a police officer,” Jaani said, adding that he was assured fighting corruption is a high priority for Center. “It helped ease my mind,” he said.

Center lost the education portfolio to Reform, which Saarts said the latter coveted because switching to a universal Estonian-language education system has long been a priority for the party. “It is clear that had the portfolio landed in the lap of a veteran Centrist, this particular government priority would have looked less sincere.”

“Taking charge of one of the best education systems in Europe and indeed the world is a great responsibility where one needs to keep a cool head,” incoming Minister of Education and Research Liina Kersna (Reform) said.

Among other key posts are Keit Pentus-Rosimannus as finance minister,  Maris Lauri as justice minister and Kalle Laanet as defense minister.

Estonian political scientist Mari-Liis Jakobson says the coalition agreement signed between Reform and Centre leans more to the side of the latter, which is headed by Jurij Ratas, the prime minister in the previous government, though the agreement's priorities seems to be more favorable to the Reform Party. Each party will have seven ministers in the government, with Reform having the finance ministery and Centre the foreign ministry.

"When looking at sectors and the level of detail of the transcript, we can see that there is more of Reform's progressive agenda. Characteristics of the Centre Party - a supportive state, social protection, etc - have been left on a 'develop-improve' level," Jakobson said.

Meanwhile, former head of the far-right opposition Conservative People's Party (EKRE) Mart Helme said that ministerial appointments in the incoming government show that fundamental decisions will be made in party backrooms and not at the ministry level.

"It is a government of pawns. These people – with a few exceptions, such as Keit Pentus-Rosimannus – will not be plotting the course of this government or be involved in making major financial decisions. All of these decisions will be made in party backrooms," Helme said on January 24.