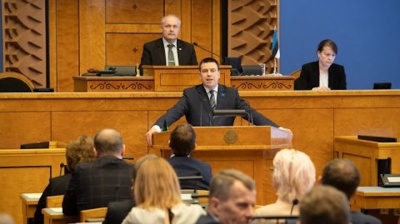 Estonia’s IT and foreign trade minister Marti Kuusik resigned from office on April 30 after allegations surfaced linking him to domestic violence.

Ratas’ agreeing a coalition deal with EKRE proved the biggest controversy following the March parliamentary election in the EU and Nato member Estonia. An EU-sceptic and anti-immigration party, EKRE was considered a pariah by the main parties Reform and Centre, which pledged no cooperation with the far-right.

But the Centre party losing the vote to Reform led Ratas to offer a place in the government to EKRE in a successful attempt to ensure a second four-year term in power.

The new government was sworn in on April 29, prompting concerns over Estonia’s altering its so far staunch pro-Western course. Ratas insists Estonia will remain committed to the EU and Nato.

Kuusik told local media the reports linking him to domestic violence were “slander” and a media campaign against him. The minister’s ex-wife Karin Kuusik also defended her former husband.

“The decision of the prosecutor's office to start criminal proceedings against me has been added to the terrifying media attack launched against me in recent days,” Kuusik said in a statement, ERR reported.

“I am giving up the office not because the accusations against me are true, but, on the contrary, in order to focus on defending myself in the criminal proceedings and restoring my good name," Kuusik added.

PM Ratas did not offer any support for Kuusik’s claims of a slanderous attack against him.

“I unequivocally condemn all types of family and close relationship violence. The police always take all such cases very seriously, regardless of the person's position. The most important thing is for victims to receive help and be protected," Ratas told Estonian media.

Compulsory income declaration shows money Babis received from the company at the heart of an EU subsidies scandal.

Governor Smolii’s departure from the NBU creates the risk of devaluation of the hyrvnia or default on its debt this year
2 hours ago
Croatia heads for hung parliament in July 5 election
3 hours ago
Evidence of massive ballot stuffing emerges in Russia's referendum on constitutional changes
20 hours ago
Poland’s coal production falls to all-time low in May
12 hours ago
Czech PM Babis earned "pocket money" of €3.4mn from Agrofert in 2019
23 hours ago