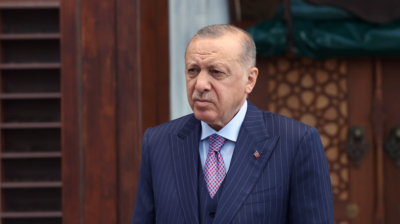 Erdogan pictured after he performed Friday prayer at a mosque in Istanbul on August 21.
By bne IntelIiNews August 20, 2021

Turkish President Recep Tayyip Erdogan has warned that Turkey will not serve as “Europe’s refugee storehouse”.

As the world waits to see how big the wave of refugees from Afghanistan will be in the wake of the fundamentalist Taliban’s takeover of the country, eyes have turned to Turkey where at least three to four million Syrians have fled during their country’s civil war. With so many Syrians taking refuge under an arrangement in which the EU pays Ankara to help meet refugee programme costs, Turkey is the world’s number one host of refugees. Analysts are now looking at whether the country at the crossroads of Europe and Asia might play a similar role in hosting Afghans, but following an August 19 cabinet meeting, Erdogan told a press conference: "Turkey has no duty, responsibility, or obligation to be Europe's refugee storehouse."

He added: "We need to remind our European friends of this fact: Europe, which has become a magnet for millions of people, can't stay outside of the problem by mercilessly closing its borders to protect their citizens' security and welfare."

Bianet reported that Erdogan's statement marked a departure from his remarks two weeks ago, when he said: "We are taking refugees because we manage the financing well and we'll continue to take them."

Over the past one-and-a-half months, hundreds of Afghan refugees have been crossing into Turkey via a mountainous route through Iran every day, according to various Turkish media reports. The situation has exacerbated the anti-refugee sentiments held by some Turks, with one district in Ankara inhabited by many Syrians enduring a violent mob attack on the night of August 12.

A Metropoll survey from July showed 67% opposition among Turks to opening borders to Afghan refugees, including more than half of voters from Erdogan’s Justice and Development party (AKP).

Erdogan—performing poorly in the opinion polls amid criticism over his mishandling of the economy and poor response to the wildfire and flood disasters that have lately hit Turkey—added in his comments that he understood people's uneasiness about the new refugee wave and said that the government was working to complete a wall on the border with Iran. So far, the wall ran along 157 kilometres of the 534-km border, he said.

During Turkey’s hosting of the Syrians, Erdogan has sometimes been accused of using the refugees as a bargaining chip with the EU in various political standoffs by threatening to open the border with Greece to refugees wanting to migrate to the European continent.

Writing for Open Democracy, political sociologist Aziz A. Hakimi, said on August 20 that it was important to remember that many Afghans who make it to Turkey don’t want to head further west to Europe.

Afghans had long migrated to Turkey, where they stayed because they could find shadow economy work to earn some money for themselves and remittances for their family before returning home, said Hakimi, an associated senior researcher at Chr. Michelsen Institute in Bergen, Norway, who mainly writes about Afghanistan, war and politics, counterinsurgency, paramilitary groups, gender, marriage and migration.

Hakimi observed: “My research shows that, until recently, many Afghans, especially young men, did not necessarily head to Europe to become refugees. Many of the young men I worked with in Afghanistan and Turkey in 2017 and 2018 had other, more mundane motivations for migration. These young Turkmen-speaking men from northern Afghanistan embarked on dangerous journeys through Pakistan and Iran to reach Turkey. There, they found jobs in the country’s construction and service industries, or as cooks, waiters, and cleaners. A few worked in a garment factory, and the clothes they made were exported to markets in the Middle East and Europe.

“These men had strong social ties to their communities back home in Afghanistan, meaning hardly any were interested in migrating to Europe. Instead, they worked illegally in Turkey, under exploitative conditions and in constant fear of deportation. They aspired to masculine ideals – wanting to be the breadwinner, to provide for their families, and to achieve the social status and prestige that comes with marriage. An arranged marriage, in which the bride is chosen by the groom’s parents, is still considered the most prestigious route to matrimony and household formation in Afghanistan.

“And so they sent remittances home to support their families and saved some money on the side towards a bride price. The marriage market has changed, and Afghan rural household resources, based on land and agriculture, are no longer sufficient – cash is instead required to pay a hefty bride price. Large, expensive weddings have also increasingly become the norm. After five to six years, the men would return to their villages to get married and start families. This circulatory mode of itinerant existence – working in Turkey and providing for families back home in Afghanistan – has come under intense pressure due to the pandemic, closed borders in the region, and armed conflict in Afghanistan.”

Since the 2015 refugee crisis faced by Europe, the EU-Turkey migration deal, which came into effect in 2016, has substantially curbed migrant arrivals. The number of first-time asylum applicants in the EU fell to 631,300 in 2019. That is nearly half what it was four years earlier.

In the years since the migration deal was struck, the EU has strengthened its border and coast guard agency. Previously dependent on voluntary contributions from EU capitals, it had no operational staff or ability to conduct search and rescue operations. It now has a standing corps equipped with ships and vehicles. The agency also negotiates with third-party nations on taking migrants.

Another difficulty for Afghan refugees looking to make it to Turkey via Iran is that in late 2020, Iran proposed new legislation targeting Afghans that would make undocumented migrants liable to prison terms of up to 25 years.

In 2019, Turkish authorities detained 455,000 irregular migrants, according to the interior ministry’s directorate general of migration management.