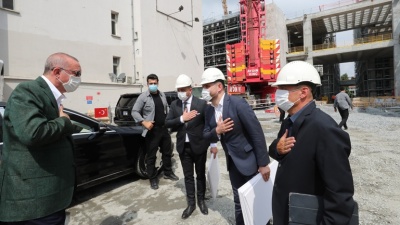 There'll be no layoffs without the say-so of Erdogan (left).
By bne IntelIiNews July 24, 2020

Turkish President Recep Tayyip Erdogan has been given the power to extend a layoff ban for up to another year following a July 23 vote in parliament. The layoff ban was first imposed in April for three months to help address the impact of the coronavirus (COVID-19) pandemic on jobs. Under a new law, Erdogan can extend the ban by three months at a time until June 30, 2021.

The move comes as a Reuters poll of 42 economists determined that Turkey can only expect a U-shaped recovery from the coronavirus impact on its economy and is set to suffer its first annual contraction in GDP for a decade.

Turkey’s official headline unemployment eased to 12.8% in the March-May period from 13.2% a month earlier, but analysts say the data does not relate the economic blow caused by COVID-19 and there has anyway long been deep scepticism over whether the state’s figures on joblessness in the country come close to showing its true extent given, for example, the great number of people deemed not eligible for unemployment benefit. In late April, analysts pointed to Turkey’s ranks of “employed unemployed”. Seyfettin Gursel, the leading professor of economy working on unemployment in Turkey, gave a stark warning in an April 17 op-ed for Ahval entitled “Coronavirus threatens 20 percent unemployment and social collapse in Turkey.”

According to another section of the new law, Erdogan, Turkey’s first executive president, now has the authority to decide for each sector whether to extend the short labour pay benefit. The system provides additional wages to employees whose hours are cut short. The law also enables the payment of social security premiums from the unemployment fund for three months to private sector companies that return to normal working hours after benefiting from the short labour pay or cash support system.

The short labour pay and social security premium measures will expire at the end of the year as things stand.

The Reuters poll, conducted among economists both inside and outside Turkey from July 21-23, produced a median forecast for a GDP contraction of 4.3% in 2020, with drops in the second and third quarters of 12.2% and 3.1%, respectively. But the median anticipation of respondents was that the economy would grow next year by 4.5%.

“We are seeing a U-shaped recovery in the Turkish economy right now... However, the uncertainties about a possible second wave of the [coronavirus] outbreak necessitates a cautious approach to these economic recovery scenarios,” Enver Erkan, an economist at Tera Yatirim, was quoted as saying.

Stuck to the line

The government forecast 5% economic growth this year before the coronavirus crisis erupted. It has since stuck to the line that the economy could still grow this year, following a 4.5% first-quarter expansion. The suspension of much economic activity in response to the onset of COVID-19 did not come until Turkey officially recorded its first coronavirus case in mid-March. Steps to properly re-open the economy have occurred since June.

It was back in 2009 that Turkey’s economy last contracted on an annual basis, shrinking by 4.7% following the world financial crisis. From 2010 to 2018, the country’s average growth rate was more than 5%, much thanks to a construction boom driven by post-crisis cheap capital.

Other poll predictions included the central bank cutting its policy rate to 8.00% by the end of this year from the 8.25% it stuck with at a July 23 rate-setting meeting; official annual inflation declining from its June level of 12.6% to 10.2% by the end of the year; and the current account balance swinging to a deficit of 2.3% of GDP this year and next.

World must tell Turkey to “get out” of Caucasus says Armenian PM
Are the Caucasus energy assets in danger from a war in Nagorno-Karabakh?
Turkey denies Turkish F-16 jet shot down Armenian plane over Armenia