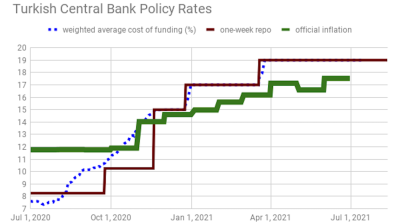 Previous calls from Turkey’s President Recep Tayyip Erdogan for rate cuts by August have gone unfulfilled with the country’s central bank on July 14 announcing that it was holding its benchmark rate at 19% because of risks in the inflation outlook.

Unless Erdogan makes another shock intervention in his country’s monetary affairs—in his pursuit of cheaper money to fuel growth, he has fired three central bank governors in three years—it appears that late this year is the soonest the policymakers could begin an easing cycle. But there are signs that officials in Turkey are gearing up to report a rapid rebound in the economy from the depths of the coronavirus crisis period, which, as Capital Economics noted, might explain why Erdogan’s “desire for rate cuts has cooled recently”.

In explaining why it was holding the key rate, the central bank’s policy committee said: "Possible volatility in inflation during the summer due to the reopening and high levels of inflation expectations continue to pose risks to the pricing behaviour and inflation outlook."

Official inflation came in stronger than expected in June, hitting a two-year high of 17.5%. Recent domestic energy hikes indicate that it is probably on course to rise close to 19% in July and stay elevated in the few months thereafter. That could pose a problem for central bank governor Sahap Kavcioglu, who has stuck to the 19% main interest rate at the four policy meetings that have taken place since he was appointed in March after the firing of his more hawkish predecessor. Kavcioglu has previously suggested that interest rates will be kept above inflation. The markets could soon be pressing hard for a rate hike, rather than the cut desired by the Erdogan administration.

Jason Tuvey at Capital Economics concluded: “We think that an easing cycle is now unlikely to commence until late this year when inflation will fall sharply as the effects of previous falls in the lira start to unwind. Our forecast is for the one-week repo rate to end this year at 17.00% and to be cut to 12.00% by end-2022.”

A Reuters poll showed analysts expected rate cuts to begin in the fourth quarter when price rises should ease a bit. But estimates of the size of the cuts have narrowed in recent months as price pressures remained.

"We still expect the first 50-point cut in October, but strength in economic activity and in price pressures could potentially lead to a later and slower easing cycle," JP Morgan analysts said in a note.

The weak Turkish lira, down 14% this year after touching an all-time low of 8.80 to the dollar in early June, pushes up inflation via Turkey's heavy imports, while a coronavirus lockdown re-opening in the last two months has restored demand.

“We are quite cautious about Turkey’s macroeconomic imbalances and uncertain policy outlook with respect to the central bank, but this does not mean that we do not expect a punchy activity rebound in the near term,” Tatha Ghose, FX and EM analyst at Commerzbank, wrote in a note.

However, Ghose anticipated that growth would suffer a severe downturn in 2022 as Turkey’s “unconventional monetary policy experiment unravels”.

Credit Suisse said in a note last week that tighter policy was required to rein in runaway inflation.

On the stock market, Turkish stocks saw a 1% gain on reports that the Erdogan government expanded regulations for asset management firms, allowing for more flexibility in debt transfers.