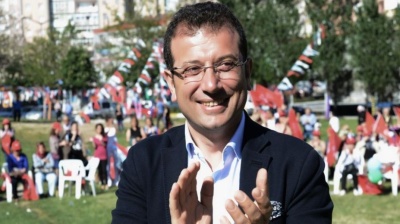 The AKP has refused to accept the momentous victory of the CHP's Ekrem Imamoglu.
By bne IntelliNews April 16, 2019

Turkish President Recep Tayyip Erdogan’s Justice and Development Party (AKP) has formally called for a new election in Istanbul, refusing to accept the narrow defeat it suffered to the united opposition’s candidate at the end of March.

The AKP submitted an “extraordinary objection” to the High Election Board (YSK) on April 16, with a partial recount of the vote tallies in some districts of the business and cultural capital still ongoing. It alleged irregularities tainted the results of the vote. If the ballot box outcome was accepted it would mean the Islamist-rooted and populist party, which together with some predecessor parties has controlled Istanbul for a quarter of a century, surrendering the mayoralty to the secular Republican People’s Party (CHP).

Markets would not take kindly to another municipal election campaign that will nationally be seen as another referendum on Erdogan. It would produce renewed political turmoil at a time when the government needs to focus on undertaking solid measures to pull Turkey out of its currency crisis-inflicted recession, the first recession the country has experienced in a decade.

Erdogan rose to prominence after becoming Istanbul mayor in 1994. The strongman’s refusal to concede defeat will be attacked by political opponents as representing another terrible crack in Turkey’s democratic foundations.

“Even if the High Election Board rejects this request, the damage to Turkey’s reputation is already done,” said Timothy Ash, a senior strategist at BlueBay Asset Management in London. Prior to the official call for a fresh poll, Ash said Turkey “needs another election like a hole in the head”.

Albayrak talks of “no scheduled elections”
Finance minister Berat Albayrak on April 17 even referred to there being no scheduled elections ahead in Turkey as he tried to talk up confidence in the Turkish economy. “We’ve come out of a difficult period with a minimum amount of damage,” he said. “We’ll take whatever steps necessary to meet our targets because there are no elections ahead of us. We will take those steps with great ease.”

The latest Istanbul vote count shows the CHP’s Ekrem Imamoglu ahead by around 14,000 votes in the city of 16mn.

The AKP previously requested a separate new election in the Istanbul suburb of Buyukcekmece, citing claimed voter registration irregularities. The election board had denied its request for a full recount in the city.

Nearly 17,000 votes cast for AKP were registered for other parties, he alleged. He didn’t produce any evidence, though walked into the election board building with three black roller bags that he said were stuffed with evidence of fraud, Bloomberg reported.

In the elections, the capital Ankara and cities along the Mediterranean coast slipped from the grasp of Erdogan’s populist-nationalist alliance, which largely stood its ground across much of the country’s rural interior.