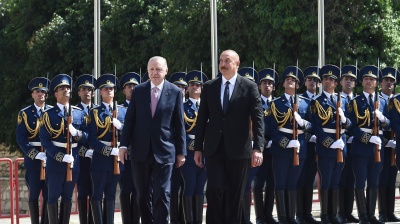 Erdogan, left, was treated to a guard of honour on his arrival in Azerbaijan. He is seen accompanied by Azerbaijani counterpart Aliyev.
By bne IntelIiNews June 15, 2021

Turkish President Recep Tayyip Erdogan on June 15 became the first high-ranking foreign leader to visit Nagorno-Karabakh since it was recaptured by Azerbaijani forces during last year’s Second Nagorno-Karabakh War. Erdogan’s visit was to Shusha, a culturally symbolic city for foes Azerbaijan and Armenia.

The visit will not go down well with Armenia, which during the six-week war that ended last November with a clear Azerbaijani victory and a Moscow-brokered ceasefire that surrendered swathes of territory to Baku, protested that a bellicose Turkey had deployed military advisers in the field to direct Azerbaijani offensives as well as Syrian mercenaries. Both Turkey and Azerbaijan denied that that was the case, but Turkish, as well as Israeli, combat drones, including “kamikaze” drones, acquired by Azerbaijan were widely seen as decisive in bringing about Armenia’s stinging defeat in the world’s first “drone war”. While the conflict was under way, Erdogan dismissed Western calls for a halt to the fighting, but since Donald Trump departed the White House and Joe Biden arrived in the Oval Office, there has been a noticeable adjustment in Turkey’s foreign policy that has seen less aggression expressed towards Armenia and attempts to rebuild torn ties with regional rivals including Saudi Arabia and Egypt. Erdogan’s political and economic difficulties in Turkey have reached dire straits and upsetting the Biden administration with a continuation of the aggressive foreign policy Erdogan deployed throughout the Trump years—Trump remained almost entirely disengaged from the Karabakh war—would risk a potentially perilous worsening of the situation.

On his visit to Shusha, Erdogan was greeted by Azerbaijan’s strongman president Ilham Aliyev.

He was accompanied by First Lady Emine Erodgan, Turkish Defence Minister Hulusi Akar and several other top officials during a tour of the city, which suffered severe damage in the conflict that claimed over 6,000 lives.

Turkish companies are expected to play a major role in post-war reconstruction efforts.

Shusha, sometimes referred to as the “pearl” of Nagorno-Karabakh, has strategic military value as it is located on high ground above Nagorno-Karabakh’s capital Stepanakert and the road linking the disputed territory with Armenia.

Following the Shusha visit, Erdogan, who met Biden on the sidelines of a Brussels Nato summit on June 14, was set to deliver a speech to the Azerbaijani parliament. On June 16, he will attend the Euro 2020 football match at the Baku Olympic Stadium between Turkey and Wales. The alliance between Azerbaijan and Turkey is so close that the match has been described as a “Turkey home game”. AFP reported that during the Shusha visit, Erdogan pledged that Turkey would support Azerbaijan if it was attacked.

Erdogan loyalist newspaper Daily Sabah on June 15 reported that Erdogan and Aliyev signed a memorandum of alliance “to carry relations further in several fields” during the historic Shusha visit.

At a joint press conference, Aliyev reportedly said that the memorandum included political and commercial issues while "our cooperation in the defence industry as well as mutual military aid are especially underlined in this document”.

It was also reported that Erdogan for his part said that “Karabakh has returned to its owners", while once again congratulating Azerbaijan on its victory in the war.