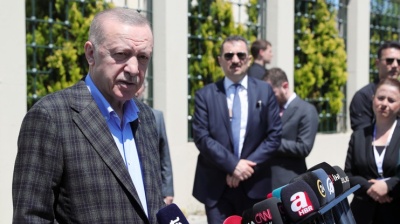 Erdogan voiced his opposition to granting Nato membership to Finland and Sweden after performing Friday prayer at Hz. Ali Mosque in Istanbul. / Turkish Presidency.
By Will Conroy in Prague May 13, 2022

President Recep Tayyip Erdogan said on May 13 that it would not be possible for Nato member Turkey to support plans for Sweden and Finland to join the defence bloc, claiming the Nordic countries were "home to many terrorist organisations".

For Nato to take in new members, there must be unanimous agreement among its existing members, so Erdogan’s intervention is a major concern as the West attempts to step up its response to Russia’s aggression in Ukraine.

"We are following the developments regarding Sweden and Finland, but we don't hold positive views," Erdogan told reporters in Istanbul, adding that it had been a mistake for Nato to accept Greece as a member in the past.

"As Turkey, we don't want to repeat similar mistakes. Furthermore, Scandinavian countries are guesthouses for terrorist organisations. They are even members of the parliament in some countries. It is not possible for us to be in favour," he added.

There was little immediate response to Erdogan from Helsinki and Stockholm, but the Financial Times quoted Ann Linde, Sweden’s foreign minister, as telling Swedish radio on May 13 that Turkey could be trying to use the situation to gain something it wanted. “We know that ratification processes always involve uncertainties, not least that the ratification could be used for domestic politics,” she said.

Turkey has many times hit out at Sweden and other Western European countries for their approach to organisations designated as terrorists by Ankara. Those include the Kurdish militant groups PKK (Kurdistan Workers’ Party) and YPG, and a supposed network of followers of US-based self-exiled Islamic preacher Fethullah Gulen, whom Turkey blames for the 2016 coup attempt against the Erdogan administration (the allegation is strenuously denied by Gulen).

"Turkish national security elites view Finland and Sweden as semi-hostile, given the presence of PKK and Gulenists. It's gonna take arm twisting to get sign off [on the Nato applications]," Aaron Stein, research director at the Foreign Policy Research Institute, said on Twitter.

Erdogan’s response to the Finnish plan to join Nato, announced on May 12, and an expected application from Sweden, will re-open the debate on whether Turkey, a Nato member for 70 years, is proving more a hindrance than a help in efforts to back Ukraine in its war with Russia and contain any further territorial ambitions Moscow might hold.

To date, Kyiv and the Western powers have been tolerant of Turkey’s decision not to introduce war sanctions or other penalties, such as an airspace ban, against the Kremlin. They have even stood by and said little while sanctioned Russian oligarchs have opted to use Turkey as a bolthole.

Ankara argues that as a Black Sea maritime neighbour of Ukraine and Russia that maintains strong economic and diplomatic relations with both Moscow and Kyiv, it is uniquely positioned to play the role of peacemaker in efforts at ending the conflict in Ukraine. At the same time, it is clear that if Turkey was to have a major fallout with Russia, the consequences would deal a grievous blow to its economy, a brittle economy that has been in a state of crisis for several years. Turkey is very much dependent on Russia for energy, much trade and, during summer months, an influx of millions of hard currency-spending tourists.

The picture is further complicated by the fact that, while Turkey has angered Nato and Washington by acquiring Russian S-400 advanced missile defence systems, it has delivered Bayraktar armed drones to Ukraine, which have notched up several headline successes in taking out Russian military hardware.

Erdogan – who, performing poorly in Turkish opinion polls, must face a presidential election by June next year at the latest – has declared his objections to Finland and Sweden joining Nato just two days after US President Joe Biden took the step of formally requesting that Congress approve the sale of upgraded weapons systems, radar and other technical equipment to substantially improve the capabilities of Turkey's fleet of F-16 fighter jets.

Congress has been running an unofficial boycott of major arms sales to Turkey in response to Ankara’s purchase of the S-400s and in relation to other concerns such as Turkey's disregard for basic human rights. The crisis surrounding the Ukraine war appeared to have prompted the Biden request, given Turkey’s efforts to bring Russia and Ukraine to the table, the drone deliveries to Kyiv and the need for a Nato show of unity.

Biden might now be forced to rethink his position on selling weapons to Turkey.

Turkey has also requested that the US sell it 40 new F-16s. The Wall Street Journal reported this week that the Biden administration would gauge the level of support in Congress for agreeing to the F-16 equipment request before deciding on how to respond to the wish for fighter planes.

Erdogan made the move for the F-16s knowing that Turkey is unlikely in the foreseeable future to get its hands on any of the F-35 stealth fighter jets it ordered from the US prior to the move to acquire the S-400s. The US claims the S-400s could be used to obtain sensitive information about F-35 capabilities.

US and Chinese slowdown will tip the world into recession, says IIF
New Putin decree could force foreign stakeholders out of Sakhalin-2 gas project
Russia threatens to sever diplomatic relations with Bulgaria over diplomat expulsions