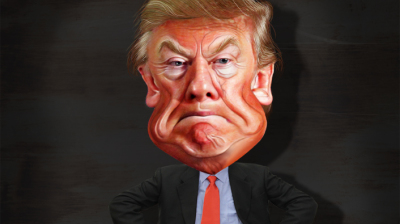 Trump. Just how strategically brilliant is he?
By bne IntelliNews October 17, 2019

The BBC reported Erdogan staff as saying the Turkish strongman, infuriated by the letter, chucked it in the trash and launched the Syrian operation the very same day. 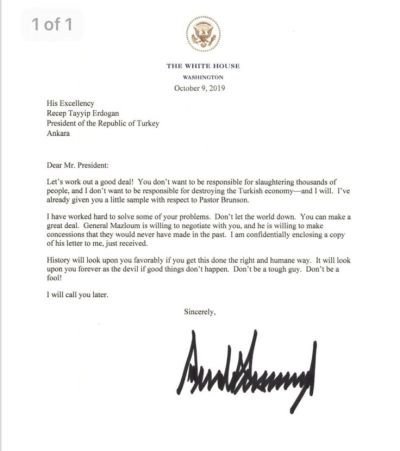 In the missive, dated October 9, Trump, reportedly so proud of his letter that he has freely handed copies to Democrat opponents, told Erdogan: “Don't be a tough guy. Don't be a fool!”

According to BBC Turkish, quoting Erdogan presidential sources, "President Erdogan received the letter, thoroughly rejected it and put it in the bin."

The letter was obtained by US media on the eve of US Vice President Mike Pence’s October 17 visit to Ankara to urge a ceasefire in Syria. It has been subject to an explosion of ridicule and lampooning on social media. The Mother Jones website wryly observed: “Apparently the White House has confirmed that this [letter] is real.”

Soner Cagaptay, director of the Turkish Research Program at The Washington Institute for Near East Policy, wrote on Twitter: “This Trump letter to Erdogan is the most damaging correspondance that could’ve been leaked ahead of VP Pence’s visit to Ankara tomorrow. Now, Erdogan has no option but to delay ceasefire in Syria less he be humiliated in front of his nation as weak and bowing to America’s threat.”

Although Trump has claimed his approach to US policy on Syria is “strategically brilliant”, it is hard to fathom what is going through his head.

Prior to mounting the incursion, Erdogan shared phone calls with Trump. He told the US president his forces needed to invade northeast Syria to form a “buffer zone” cleared of Kurdish militia it regarded as a “terrorist” threat that could back the decades-old Kurdish insurgency in Turkey.

Those forces were comrades-in-arms to US troops in a joint and successful effort to destroy the Islamic State so-called Caliphate in Syria. But Trump turned his back on them, telling Erdogan US forces would not stand in the way of the incursion—even though he insists he did not actually approve of the military move. Huge bipartisan pressure was then brought to bear on Trump not to abandon the Kurds or remove the US military presence in northern Syria, thereby leaving the field open to Russia, Iran and Damascus. At that point Trump appears to have stepped up his request to Erdogan not to push his forces into Syria, despite the removal of US forces.

Trump remains defiant that the withdrawal of American troops is a big plus for the US as it helps to meet his 2016 election pledge to his base to pull the US out of foreign wars that are not its business. On October 16 he made comments including, "They have a problem at a border. It's not our border. We shouldn't be losing lives over it" and described the formerly US-allied Kurds as “no angels”.

Analysts and opponents, however, have pointed out that what might not be a US problem now, could become so later, for instance if Islamic State—no longer under the heel of a strong American-Kurdish mission and imprisonment regime—regroups and attempts to stage attacks on US civilians or military personnel. The stark betrayal of an ally might also not stand Washington in good stead when it comes to forging future alliances in the Middle East or anywhere else. The Kurds lost around 11,000 fighters taking the lead in the ground battle against Islamic State in Syria. Deserting them in the face of an imminent Turkish offensive will lead to recriminations that will be tough to soothe even a long time from now.