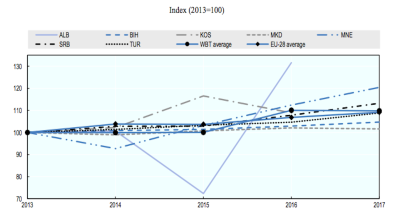 The six Western Balkans countries and Turkey are making progress in using the potential of their small and medium-sized enterprises (SMEs), but much remains to be done, reveals the latest SME Policy Index: Western Balkans and Turkey 2019 presented at the EBRD annual meeting in Sarajevo on May 7.

The index gives an overview of the implementation of the ten principles of the Small Business Act for Europe (SBA) in the seven economies in 2016-18, identifying challenges affecting SMEs and making recommendations to overcome them.

The report states that “significant strides in building a more SME-friendly policy environment have been made” in all seven of the EU pre-accession economies.

Of the seven, Albania, Macedonia, Montenegro, Serbia and Turkey are EU accession candidates, though Turkey — whose economy is larger than those of the six Western Balkans countries put together — has seen its progress stall for political reasons. Bosnia is in the process of applying for candidate status, while Kosovo is not yet recognised as an independent state by all the EU members.

The most significant improvements can be seen in the area of public services available to SMEs, including the roll-out of e-government services and easier registration, licensing and tax compliance procedures, the report said.

However it is noted that the potential of SMEs remains “largely untapped”.

The EBRD statement said that the progress is needed in regulation, productivity and integration in this sector.

“SMEs are under-represented in international trade and their contribution to value added remains low as they have difficulties in moving or expanding into high-value added activities,” it said.

The recommendations in the report include enhancing regulatory conditions to improve SMEs competitiveness, helping SMEs further to improve their productivity, as well as expanding regional co-operation over SME development.

"The SME Policy Index provides valuable recommendations to policy makers of the region. The SMEs are the centre of the EU external policies as they are the backbone not only of the EU’s but also of our partners’ economies. To scale up and grow they need concrete advice on access to international financing and markets,” said Katarina Mathernova, deputy director-general of the European Commission, at the launch of the SME Policy Index.

Access to finance is a particular problem in the Western Balkans countries, even though banking sectors in the region are now recovering following the crisis of the late 2000s.

“Lending to small businesses remains subdued across large parts of the region,” says the EBRD statement. “Bank lending is supported by government-sponsored financing or guarantee schemes and some economies have made efforts to improve their design in order to be more market and user friendly. Legal reforms have started or been implemented in a number of economies to lay the groundwork for the development of non-bank financing alternatives such as leasing and factoring. Few economies also explore venture capital and crowdfunding to allow for a wider range of funding sources.”

The fifth edition of the index was produced by the Organisation for Economic Co-operation and Development (OECD) and government officials and other stakeholders in seven pre-EU accession economies, in co-operation with the EBRD and the European Training Foundation (ETF). The work was funded by the European Commission.

Polish industrial production continues boom in December
10 hours ago
Slovenia’s economic sentiment indicator up 2.2 pp m/m in January
7 hours ago
National Bank of Ukraine retains a key policy rate at 6%, the outlook of the CPI deteriorates
2 days ago
Russia's National Welfare Fund accounts for almost 12% of GDP
3 days ago
Bosnia's exports in 2020 amounted to BAM10.5bn, trade deficit to BAM6.3bn
4 days ago