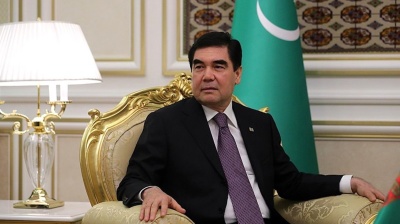 Turkmenistan published a draft bill on constitutional amendments on February 24 that seeks to turn the single chamber of the ex-Soviet country's parliament into a two-chamber institution and place the head of the upper house as second-in-line for the presidency.

The bill, signed by Turkmen President Gurbanguly Berdimuhamedov, may potentially be showcasing a succession road map for the Turkmen leadership. The move came amid ongoing rumours about Berdimuhamedov’s alleged health issues and his efforts to groom his son, Serdar Berdimuhamedov, who is currently a lawmaker, as his successor. The Turkmen leader’s abrupt disappearance during the summer last year sparked speculation about his poor health  and even false reports of his death.

While the parliament in Turkmenistan has no real power, the amendments could lead to Berdimuhamedov placing Serdar as the head of the upper house of parliament. This might mimic a similar situation in Kazakhstan, where ex-president Nursultan Nazarbayev's daughter Dariga Nazarbayeva is second-in-line for the presidency due to her current position of Senate speaker.

Moreover, the draft bill notes that the president can be "removed from office ahead of schedule if he is unable to fulfill his duties due to illness."

Berdimuhamedov appointed the 38-year-old Serdar as minister of industry and construction on February 8. Three days earlier, it had been revealed that Turkmenistan was planning to import $1.47bn worth of equipment and materials to build a new city from scratch, with Serdar set to oversee construction. His father tasked him with the construction of the new provincial centre of Ahal province.

Serdar, who previously held the position of a provincial governor in 2019, also headed a parliamentary committee on legal affairs in 2017-2018 along with a deputy foreign minister post he was assigned to in March 2018.

Hereditary transit of power is not the rule in Central Asia. Gulnara Karimova, the daughter of Uzbekistan’s late autocrat Islam Karimov, had long been seen as her father’s potential successor before she fell out of his favour, only to end up under house arrest. However, Azerbaijan’s Ilham Aliyev is the son of the previous leader Heydar Aliyev and retains a firm control over the power.

Serdar will certainly be in the running to be made a leader, but as the change in leadership in Uzebkistan showed the decision will ultimately be made by a cabal of the country’s elite behind closed doors.

Turkmenistan already went through similar machinations when its previous leader Saparmurat Niyazov, better known as Turkmenbashi or “Father of the Turkmens”, died in 2006. As bne IntelliNews reported at the time, the news of the death was delayed for weeks while the elite of the country settled on a replacement. This resulted in the relatively unknown Berdimuhamedov getting the job, though unconfirmed rumours and reports did claim that Berdimuhamedov is actually Niyazov’s illegitimate son.