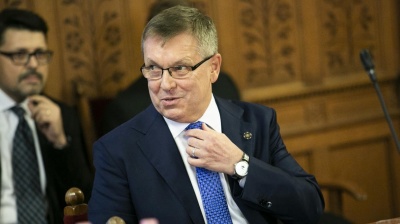 The Hungarian National Bank (MNB) projects a slowdown in Hungary's economy this year, but it expects Hungary to maintain its growth advantage over countries in the eurozone, according to the central bank's latest Quarterly Inflation report released on March 26.

In view of the negative effects of the coronavirus on the economy, growth will decelerate considerably in H1, but as the negative impacts fade and economic activity is restored, domestic growth will become dynamic again from H2, it said in the report.

MNB's outlook is rather upbeat in comparison to gloomy forecasts by analysts, which expect Hungary to fall into a recession.

The current account deficit will remain 0.5-0.6% of the GDP in 2020. MNB's projections for investments seem overly optimistic, according to local financial website Portolio. The MNB cut its forecast from 4.6% in December to 1.1-2.9% in the latest report.

It is rather a startling assumption that growth in gross wages would be unchanged from the 9% level seen in 2019 and that the jobless rate would only rise by 0.5pp to 4%, it noted.

Household consumption is expected to remain the most important factor behind economic growth over the forecast horizon, the central bank said.

MNB also carried out an in-depth look at how various sectors could be affected by restrictions due to the pandemic.

The MNB said temporary shutdowns and restrictions could cause temporary outages in the supplier chains in the vehicle sector, a major driver of Hungary's economy. The shutdown of production at the Audi, Mercedes, Suzuki and Opel factories for one month could cut GDP by almost 0.3-0.4%.

The direct share of accommodation and food services is around 2% of the GDP but with other tourism-related industries its share is much higher. In 2018 58mn foreign visitors arrived in Hungary, 70% of them visited Budapest. Their spending came to HUF2.1 trillion (€5.9bn), accounting for roughly 60% of all the tourism receipts and spending. The MNB estimates that a one-month shutdown of the industry will curb GDP by roughly 0.4-0.5pp.

The transportation and storage industry accounts for 5.1% of GDP and employs almost 300,000 people. On a monthly basis, the slowdown in this segment would lead to a 0.15-0.25% drop in GDP, according to the report.

The combined impact from a one-month shutdown or major deceleration in these three major sectors is near 1% of the GDP, which is around the same rate of decline forecast in the inflation report. This implies an assumption by central bankers that the coronavirus epidemic would wind up in a month, Portfolio said, questioning the credibility of the forecast.

Speaking after the release of the report, an MNB official highlighted uncertainties surrounding the projections, but added that the even the most unfavourable scenario of the central bank sees Hungary avoiding a recession in 2020.