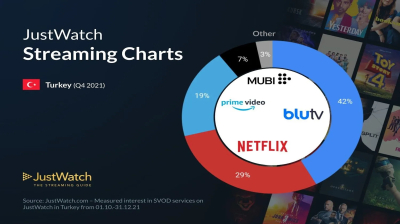 Disney+, an online streaming platform launched in 2019 by The Walt Disney Company (New York/DIS), has come online in Turkey, according to local media reports.

The streaming service offers packages at Turkish lira (TRY) 35 (€2) per month and TRY280 per year.

On June 8, Disney+ came online in Estonia at €8 per month and €80 per year. It has gone online in 41 countries this summer so far.

As of Q4 2021, BluTV, launched in 2016 by Dogan Holding (DOHOL), remained the market leader in Turkey’s subscription video-on-demand (SVOD) market with a 42% share, according to data from Justwatch.

In 2021, Discovery, a unit of Warner Bros. Discovery (Nasdaq/WBD), bought a 35% stake (for a consideration of $20mn) and Istanbul-based Twozero Ventures bought a 3% stake in BluTV.

Netflix (Nasdaq/NFLX) is in second place on Turkey's SVOD market, with a 29% share.

The number of Netflix subscribers in Turkey rose to more than 3.5mn in March this year from 3mn in December 2020 and from around 1.5mn in 2019.

Amazon Prime Video, owned by Amazon (Nasdaq/AMZN, active in Turkey since 2018), has a 19% SVOD market share, followed by London-based MUBI, launched in 2007 by Turkish entrepreneur Efe Cakarel, with 7%.

Other players include local platforms such as Puhu TV (owned by Dogus Holding), Exxen (launched in 2020 by Acun Medya) and Gain Medya (launched in 2021), along with Apple TV+ (Nasdaq/AAPL), HBO Max (a unit of Warner Bros. Discovery), beIN Connect (owned by Qatar) and Peacock (Comcast/Nasdaq/CMCSA).

Russian e-commerce turnover up 1.5-fold in 1H22
3 days ago
Home of the humbled lira, Turkey’s the biggest cryptocurrency market in the Middle East
3 days ago
Business Insider: Western tech majors have tested or used controversial Russian face recognition technology
10 days ago
From 4G to 6G: How Russia seeks to develop mobile networks amid shortages of domestic frequency and foreign equipment
10 days ago
Should I stay or go for founder of Russian internet major Yandex
14 days ago