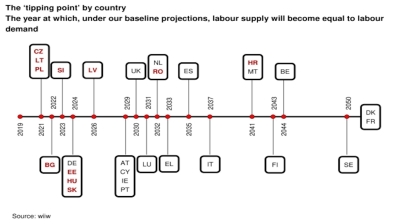 Labour demand will overtake supply in most of the eastern part of the EU within the next few years.
By Clare Nuttall in Glasgow June 17, 2019

The ‘tipping point’ at which labour demand will become equal to labour supply is just two years away in the Czech Republic, Lithuania and Poland, says a new study from the Vienna Institute for International Economic Studies (wiiw).

While most EU countries are set to hit this point within the next decade, factors including demographic decline and the mass emigration of the working age population to western Europe, means the EU members from Central, Eastern and Southeast Europe are facing a more immediate labour market crisis.

However, this is a pressing issue for the whole of the bloc, as by 2030 labour demand will equal supply in most of the EU, and by 2050 supply will exceed demand only in France and Denmark, according to wiiw’s report “EU Faces a Tough Demographic Reckoning”.

By 2026, all the eastern EU member states will have passed their tipping points, with the exceptions of Romania (2032) and Croatia (2041). But even these countries have already seen a serious squeeze on their labour markets: Romania was identified by a 2018 ManpowerGroup survey has having one of the world’s most acute shortages of skilled workers, while in Croatia employers are pressing the government to make it easier for them to bring in foreign workers for the summer tourist season.

“This is an enormous challenge for policy-makers, and will become even more so in the future,” says the report from wiiw. “Policy options to counter demographic trends can be split into four main areas: higher productivity, immigration, activity rates, or fertility. However, none is a silver bullet. Even if all of these policies are pursued successfully and in combination, they are unlikely to fundamentally alter the picture.”

However, says the report from wiiw — which previously stressed the importance of investing into automation in response to tightening labour markets in CEE — “the implications of this demographic decline do not have to be all negative”.

"Combined with intelligent upgrading of infrastructure and investment in productivity-enhancing improvements in industry, there is no reason that these population trends cannot go hand-in-hand with increases in per capita GDP and living standards,” it says. “Much can be learned from Japan in this regard.”

Ukraine's retail sector turnover up 22.7% in May y/y
8 hours ago
Russian industrial production for May up 11.8% y/y
13 hours ago
Growth of Romania's stock of loans reaches double digits at end-May
18 hours ago
Russian banks extend bull run by posting $3bn in profits for May
19 hours ago
Ukraine’s revises down its GDP growth estimate in 1Q21 to -2.2% contraction
19 hours ago