Czech unemployment falls to its lowest November rate since 1996 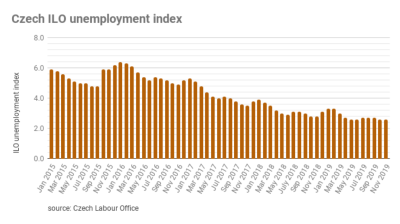 Unemployment rate in the Czech Republic remained at 2.6% in November its lowest result for the month since 1996
By Nelly Tomchikova in Prague December 10, 2019

The unemployment rate in the Czech Republic remained at 2.6% in November, reported the Czech Labour Office on December 9. The number of unemployed people has risen by 771 to 197,289 since October, but remains at its lowest November figure since 1996.

According to analysts, a slight increase in the number of unemployed people indicates a gradual turnover in the labour market. They expect unemployment to rise gradually over the coming months, remaining the lowest rate in the EU.

According to the Labour Office, the situation on the labour market continues to be affected by the favourable state of the Czech economy. “In the coming months, registered unemployment will probably stagnate or increase slightly due to end of seasonal and fixed-term jobs,” said Director General of the Czech Labour Office Katerina Sadilkova.

In November, 37,886 people registered to the office registry, slightly less than in October. On the contrary, 37,115 applicants left the registry, of which 23,230 people got employed.

“The labour market is currently within its limits. The structure of vacancies has not changed significantly yet. Demand for less qualified workers continues to prevail,” added Akcenta analyst Miroslav Novak.

Unemployment data shows a gradual turnaround in the labour market. According to the analysts, the labour market has reached its bottom in November and the unemployment rate will gradually rise in the coming months and may exceed 3% at the beginning of next year.

“The number of unemployed people increased by a few hundred. This can be considered the first signal of a turnaround in the labour market in the Czech Republic," said Raiffeisenbank analyst Eliska Jelinkova, adding that the unemployment rate can be expected to rise slightly in the coming months, though still remaining the lowest in the EU, the Czech News Agency quoted.

Meanwhile, according to CSOB bank economist Petr Dufek, the result of the unemployment rate has been improved by seasonal jobs, which will gradually disappear after Christmas. “The Czech unemployment will again reach the level of three percent at the beginning of next year,” Dufek said, CNA cited.

“The labour market remains exhausted, stumbling on its limits. We do not expect any further decline in the unemployment rate, also due to a gradual slowdown in the growth of the Czech economy," said Komercni banka's chief economist Jan Vejmelek.