Czech retail sales slows down to 3.4% growth y/y in October 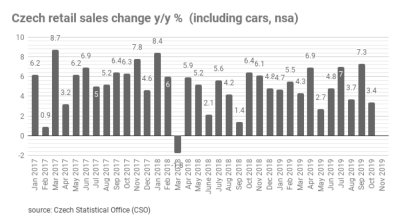 Czech retail sales growth slowed to 3.4% year-on-year in October from 7.3% in September.
By bne IntelliNews December 9, 2019

Czech retail sales growth slowed to 3.4% year-on-year in October from 7.3% in September.

Sales for sale of non-food goods and food grew by 4.5% and 3.1%, respectively, while the sale of automotive fuel decreased by 0.3%.

Usually the highest sales growth rates are in online retail, but here too the pace slowed falling to 16.8% in October y/y from 25.8% in September.

“The price deflator in retail trade, except for motor vehicles and motorcycles related to the corresponding period of the previous year (VAT excluded), was 100.2%,” said Head of the Trade, Transport, and Information Service Activities Statistics Unit Jana Gotvaldova, adding that the main driver was higher prices of food, dispensing chemist, medical and orthopaedic goods, and other household equipment.

According to analysts, consumer confidence has been gradually weakening, but given the low unemployment and wage growth, Czechs still have money and a desire to spend. The analysts do not expect households to save much at the end of this year, but a slowing economy may dampen consumer behaviour in 2020.

“In a situation where household consumption is the main driver of the economy, retail trade is naturally successful. People are basically still optimistic, unemployment is minimal and wages are rising. All this is supported by the willingness to spend,” said Komercni Banka economist Michal Brozka, the Czech News Agency quoting.

Czech Republic has been recently ranked 25th out of 152 countries with favourable conditions for online shopping, up by six places y/y, according to UNCTAD index. The Czech Republic is most perspective European country for the development of e-commerce among frequent users of mobile phones for online shopping, according to a study by JP Morgan in September. Czechs make over 54% of e-purchase through their mobiles.