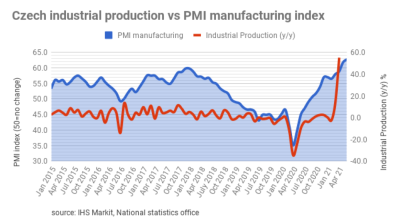 The headline seasonally adjusted IHS Markit Czech Republic Manufacturing PMI index soared in June to 62.7 in June, up from 61.8 in May – the best result on record. However, the consultant warned problems in supply chains could take the edge off growth in the months to come.

“The June PMI data signalled a substantial improvement in the health of the Czech manufacturing sector,” Markit said in a press release. “Overall growth quickened to the fastest since data collection began in June 2001. The expansion was supported by stronger upturns in output and new orders, with looser COVID-19 restrictions boosting sales to domestic and foreign clients. Business confidence also ticked higher amid hopes of further order growth.”

However, the country is not out of the coronavirus (COVID-19) woods yet, as substantial supply-chain disruptions continued to hamper production capacity and push input costs up, Markit’s panellists said.

The supply chain problems are feeding through to affect business in general. The backlog of work rose at the fastest pace since January 2011 despite a faster expansion in employment. Cost burdens rose at the sharpest pace on record, with many firms choosing to partially pass through greater input prices to clients, leading to the steepest hike in charges since January 2003.

The increase in the headline index partially stemmed from a record deterioration in vendor performance, which would ordinarily indicate more robust operating conditions but has instead stemmed from supplier backlogs and delays.

Nevertheless, with the release of a year’s worth of pent up demand output expanded robustly during June, with the rate of growth quickening to its highest since February 2018.

“The marked rise in production was linked to stronger client demand and the easing of COVID-19 restrictions. Some firms noted that output capacity was constrained by hiring troubles and supply delays,” Markit said.

A record-breaking extension to supplier delays was reportedly linked to raw material shortages and a strain on supplier capacity. Subsequently, cost burdens soared once again in June. The rate of input price inflation was the steepest on record. The increase was often attributed to further hikes in key material costs such as metals, plastics and fuel, Markit reports.

In response to marked rises in supplier prices, manufacturers increased their selling prices at the sharpest rate since data collection for the series began in January 2003. Panellists suggested that costs were partially passed through to clients through higher charges.

Meanwhile, goods producers expanded their workforce numbers again in June. The upturn in employment was the quickest since December 2017, but was not sufficient to curb growth of backlogs of work. Pressure on capacity continued to grow, with work-in-hand rising at the fastest pace since January 2011. Firms often noted difficulties finding suitable candidates for current vacancies.

In an effort to build safety stocks, firms stepped up input buying. The rise was the quickest since February 2007, with pre-production inventories up for the third month running.

Expectations improved in June, with manufacturers at their most upbeat regarding the outlook for output over the coming year for five months.