Czech producer price index up by 3.8% mostly due to increasing prices of electricity 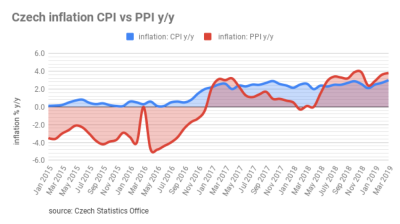 Prices of industrial producers (PPI) in the Czech Republic grew by 3.8% year-on-year in March, up from 3.6% in February, due to higher prices in electricity, gas and steam, petroleum products and food processing sectors, according to the Czech Statistics Office (CSO) released on April 16.

Among the main industrial groupings, prices of energy rose the most, by 8.6% y/y in March, up from 7.3% in February, with prices in electricity, gas and steam standing at 8.4% y/y in March.

“Service producer prices in the business sphere were higher by 2.8% (in February they grew by 2.4%). Prices for employment services (+11.0%), insurance, reinsurance and pension funding services, except compulsory social security (+7.0%), management consulting services (+6.5%), advertising and market research services (+5.8%), and security and investigation services (+4.0%) grew,” according to the CSO Director of Prices Statistics Department Jiri Mrazek.

In month-on-month terms, prices of industrial producers grew by 0.5%, with the highest increase in refined petroleum products. Prices of chemicals and chemical products and electricity, gas and steam went up by 1.4% and 0.9%, respectively, while prices of beverages and preserved meat and meat products decreased by 0.6% and 0.3%, respectively.

“We expect this growing trend to be gradually losing momentum, and we should not observe any more acceleration. The y/y dynamic in producer prices will, nonetheless, remain affected by electricity prices even in upcoming months,” said Raiffeisenbank Financial analyst Lubos Ruzicka.

According to the Eurostat data, industrial producer prices in EU28 increased by 0.2% m/m in February, with the highest growth in Slovakia, up by 1.8%. Czech Republic recorded an increase by 0.3%.