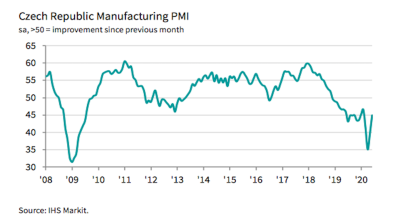 The Czech manufacturing sector Purchasing Managers' Index (PMI) saw a slight increase from 39.6 to 44.9 points in June, however, it remains under the 50-point threshold, shows an IHS Markit report released on July 1.

“The Czech manufacturing sector showed signs of the downturn reversing in June, with the contraction in production easing notably as many factories reopened. That said, the boost to output seemed to come largely from the processing of backlogs, with client demand declining sharply,” commented economist at IHS Markit Sian Jones, adding that firms highlighted troubles in the automotive sector as having hampered demand, as investment in traditional engine types is set to decrease in favour of electric vehicles.

The PMI “still remains below the 50-point threshold indicating that conditions in the Czech manufacturing segment are not improving. This is somewhat surprising given the fact that June was not affected by [coronavirus] COVID-19 lockdowns as were the previous three months,” said ING chief economist Jakub Seidler.

An increase in output came largely from reopening of factories and the processing of backlogs, despite demand conditions at its historical low level. “Companies mentioned the lack of investment in the automotive industry and halting construction projects as the main reasons behind weaker new orders,” added Seidler.

Concerning staff who were previously furloughed, “as businesses began to reopen, some firms reportedly made decisions not to renew employee contracts due to weak demand, ongoing uncertainty and in an effort to curb costs,” Jones said.

Business confidence improved in June, the companies expect their output to go up over the coming year and the client demand to boost when the economies are reopening again. “Manufacturers noted renewed optimism in the outlook for output over the coming year but continued to cut factory gate charges in the hope of boosting sales,” Jones noted.

“Business confidence improved in June for the first time since February, as companies expect output to increase in the months to come. All in all, conditions in domestic industry remain challenging. The recovery is being hampered by weaker foreign demand,” Seidler said.

On the cost front, the rate of input price inflation grew slightly in June as suppliers increased charges, however, weak customer demand saw a further discounting among Czech manufacturers, with selling prices falling at a faster pace.

“We continue to expect Czech industrial production to fall in 2020, with output forecast to drop 10% on the year,” Jones concluded.

Central European monetary policymakers set to raise rates this week
Southeast Europeans most likely in EU to believe corruption is getting worse
ING: So what is a greenium and how do we get to it?