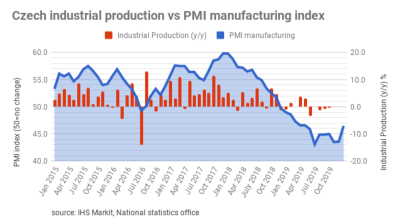 The Czech manufacturing sector PMI recovered somewhat to 46.5 in February, after it crashed to 45.2 at the start of the year, according to the IHS Markit report published on March 2.

The Czech PMI still remains underwater below the 50 no-change mark, but the index increased for the first time since it began falling in November 2017 despite weaker demand from the machinery and automotive sectors and recording the slowest deterioration in operating conditions across the manufacturing sector since May 2019,

“The Czech manufacturing sector appears to be slowly turning a corner as 2020 progresses, with declines in output and new orders easing in February, according to the latest PMI data. Foreign demand conditions still appear to be holding total new orders back, however, as export sales fell at a sharper rate,” said an economist at IHS Markit Sian Jones.

“Given the outages in China due to the spread of the coronavirus, February's PMI growth seems relatively counterintuitive. … Delays in supply delivery are counted as a positive factor in the PMI's methodology and are associated with economic activity growth, which increases the overall PMI indicator,” ING Chief Economist Jakub Seidlersaid, stressing that as a result a number of European PMIs increased in February.

According to him, the spread of the coronavirus has led to supply problems and accelerated their supplier prices, which have not been passed on to final customers. The new orders declined at the softest pace since the beginning of 2019.

Firms´ expectations were positive for the first time in five months, “midway through the first quarter amid hopes of renewed sales growth. Firms continued to shed workforce numbers though, as sufficient capacity allowed them to work through backlogs of work,” Sian noted.  “Even without the coronavirus outbreak, European industry is in a difficult situation due to the upcoming changes in the automotive sector and the transition to electromobility. Recent developments with coronavirus, however, have brought further uncertainty, especially as the virus has spread outside of China and it is not clear what negative measures this will bring in the coming weeks,” Seidler said.

“Our current forecast points towards broad stagnation in manufacturing production through the first quarter of 2020 compared to the same period a year ago,” Sian said.