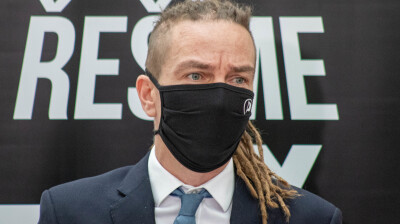 The Czech opposition Pirate Party and Mayors and Independents movement (STAN) have signed an agreement to form a progressive coalition for the parliamentary elections in October 2021 which, according to opinion polls, could allow them to overtake Prime Minister Andrej Babis's ANO party to become the largest political grouping.

"I am very pleased that the members of the Pirate Party have approved the coalition agreement between the Pirates and the STAN movement. This is a very strong mandate, which I value very much and, above all, I thank our members for it. I believe that we will not disappoint your trust and that the combination of Pirates and STAN will succeed in the elections," said Pirates chair Ivan Bartos, the coalition's candidate for prime minister. If elected, he would be the first Pirate premier in the European Union.

According to the agreement, the coalition will focus on transparency, digitalisation, human rights, and climate issues. On other issues the radical Pirates and the more staid Mayors may struggle to find consensus, though Bartos made pains to stress that the alliance was not opportunistic.

"As we have already declared, this is a solid coalition, standing on solid foundations. A coalition that will not fall apart even after the election. In those we intend to succeed and reach the highest goal - to be the winners. We are ready, if we have the opportunity, to take the lead in this country in its most difficult times. In times of an economically devastated country, in times when many people and companies are sinking,” Bartos said.

“I would say that this cooperation may be based primarily on politically pragmatic foundations. Pirates and Mayors agreed to it mainly because they want to achieve a stronger election result, they want to be a competitor for the ANO movement and … to even defeat the ANO movement,” commented political reporter Marie Bastlova.

“The Pirates do not have too many political parties to create a possible coalition with. I dare say that the Mayors and the Independents are basically one of the few entities in the Chamber of Deputies that the coalition with the Pirates could be created with,” Bastlova said.

"We do not want a revolution because we do not want to change the system. But we want an evolutionary leap that comes in biology after a period of stagnation. We feel that the potential of the Czech Republic has not been used in recent years, and the coronavirus crisis has revealed this to 'the bone marrow'," said STAN Chair Vit Rakusan for Czech Radio Plus.

According to Rakusan, STAN and the Pirates will either form the government or stay in the opposition together. They say that in a coalition they have a chance to win the election and thus meet the condition stated in recent days by Czech President Milos Zeman that the next PM should be the winner of the elections.

The popularity of the Pirate party has been growing in the past year, mainly since the outbreak of COVID-19 back in March and the government's perceived mishandling of the crisis. Together with STAN, opinion polls show they could surpass 25%, around the level that ANO has been polling.

The Pirates are not the only political coalition that Babis and his ANO party will have to deal with in the autumn elections. The three centre-right parties, the Civic Democrats, Christian Democrats and TOP 09,  have also created a coalition to increase their chances of ousting Babis. According to the latest polls, they would obtain 20% of the votes. The three parties have more in common that the Pirates-STAN combination, but they have stressed that they will operate separately after the election, and the ODS is seen as a potential partner for ANO, having recently split ranks to vote for ANO's 2021 budget.

Rakusan confirmed that the second coalition is a suitable partner for post-election cooperation. “We may have differences, but we have tested the cooperation during the coronavirus crisis. If both groups say that they want to bring about a qualitative change in policy - content and form - then they should be natural coalition partners,” he added. Taken together, the two coalitions would be difficult to beat - if they stay together.

The third coalition that has also been discussed recently is cooperation between the current junior government party the Social Democrats with the Green party and trade union representatives.

“For me, this is a bit of a sad chapter of the election year that's ahead of us. I still remember the Social Democrats as the driving force of the Czech political scene - if not a victorious force, then at least relevant and very fundamental. We are now watching a little desperate, last minute attempts and efforts to find a way to save at least 5 percent in the next parliamentary election,” Bastlova added.

According to opinion polling carried out at the end of 2020, the Social Democrats would barely cross the 5% electoral threshold for the first time in the country's independent history.